Baby, I Love the Way You Walk

Child development: Down's kids learn to just do it. 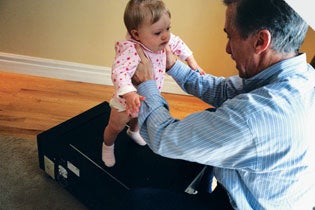 UP AND RUNNING
Dr. Dale Ulrich gets 12-month-old Isabelle Russo to take a turn on a treadmill. Ulrich’s therapy has helped babies with Down’s syndrome walk earlier–and may do a lot more.

Babies with Down’s Syndrome typically learn how to stand upright and walk a year later than other children. But Dale Ulrich of the University of Michigan has found that by getting the infants to work out on a tiny treadmill eight minutes a day, five days a week for six to eight months, he can speed up the process by as much as four months.

Ulrich wants to do a lot more than just get the babies up and around: He’s hoping to improve their cognitive abilities. Research has shown that learning to walk helps stimulate the brain. Once children start toddling around, says Ulrich, it’s easier for them to interact with their environment, which speeds up learning. Treadmill-trained babies also walk with greater strength and coordination.

This is good news because children with Down’s syndrome generally have to work harder to control their muscles, says Ulrich (who also plans to try the treadmill on infants with cerebral palsy). The babies begin training as soon as they can sit upright. At first, they take just a few steps while their parents hold them up. “She’ll do a little double step and then let her feet dangle,” said Randy Russo, when his daughter, Isabelle, was 10 months. Two months later, Russo is delighted with his daughter’s progress. “She’s doing exceptionally well,” he says. “She has a little push-toy that she holds onto as she walks around.”

Ulrich is following the children’s progress to see whether walking earlier does in fact improve their cognitive ability. He is very optimistic. “We can already improve the neural pathways that support walking,” he says. “The baby brain can do a lot when put in the right context-and we believe the treadmill is that context.”