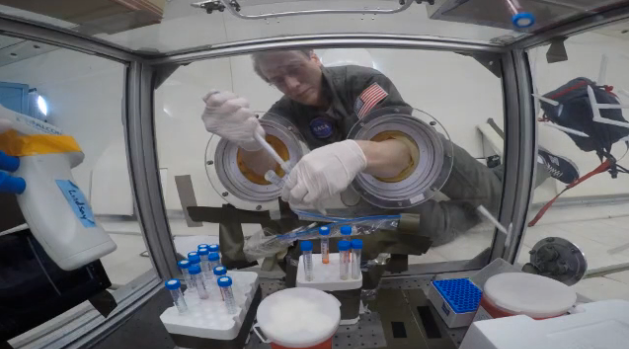 DNA analysis is essential for evaluating human health and discovering the makeup of new substances. If humans were to spend long stretch of time in space, they would need to be able to sequence DNA. But scientists had never attempted the process in zero gravity—that is, until last month, when two geneticists tried it on board NASA’s reduced-gravity aircraft, according to an article in Nature News.

The researchers wanted to test two important tools that they suspected might work differently in zero gravity. The first involves moving liquid from one container to another using a pipette—a process that involves suction and usually relies on gravity to keep substances in their beakers. This would be important for preparing DNA for long-term storage, according to the Nature News article, but also for transferring specific amounts of a given solution to dozens of other biology experiments.

The researchers knew it would be difficult to move these liquids without spilling them. So they tested three different methods. Two methods resulted in imperfect samples; one was inconsistent and difficult to control, the other created air bubbles and caused the solution to creep up the sides of the container. The third method used a certain type of pipette called positive displacement. This works like a syringe without an air cushion and is usually used for dangerous or harmful liquids, but it also worked perfectly in zero gravity, and enabled researchers to move the sample between containers without damaging it.

They also tested a small genetic sequencer called MinION under zero-gravity conditions. The handheld sequencer already has a reputation for being hardy—it was used on the ground during the Ebola epidemic, displaying results in real-time and plugging directly into a laptop’s USB drive—but the researchers weren’t sure if this particular method, which sequences DNA by pushing it through nanopores in an electroconductive surface, would work as well in space. The researchers were pleased to find that MinION’s results were the same in zero gravity as they would be on the ground.

These are promising first results, the researchers say. They hope to test both devices more exhaustively aboard the International Space Station in the next few months.