Why some people find pimple popping so grossly satisfying

Your tolerance for disgust is a big part of it. 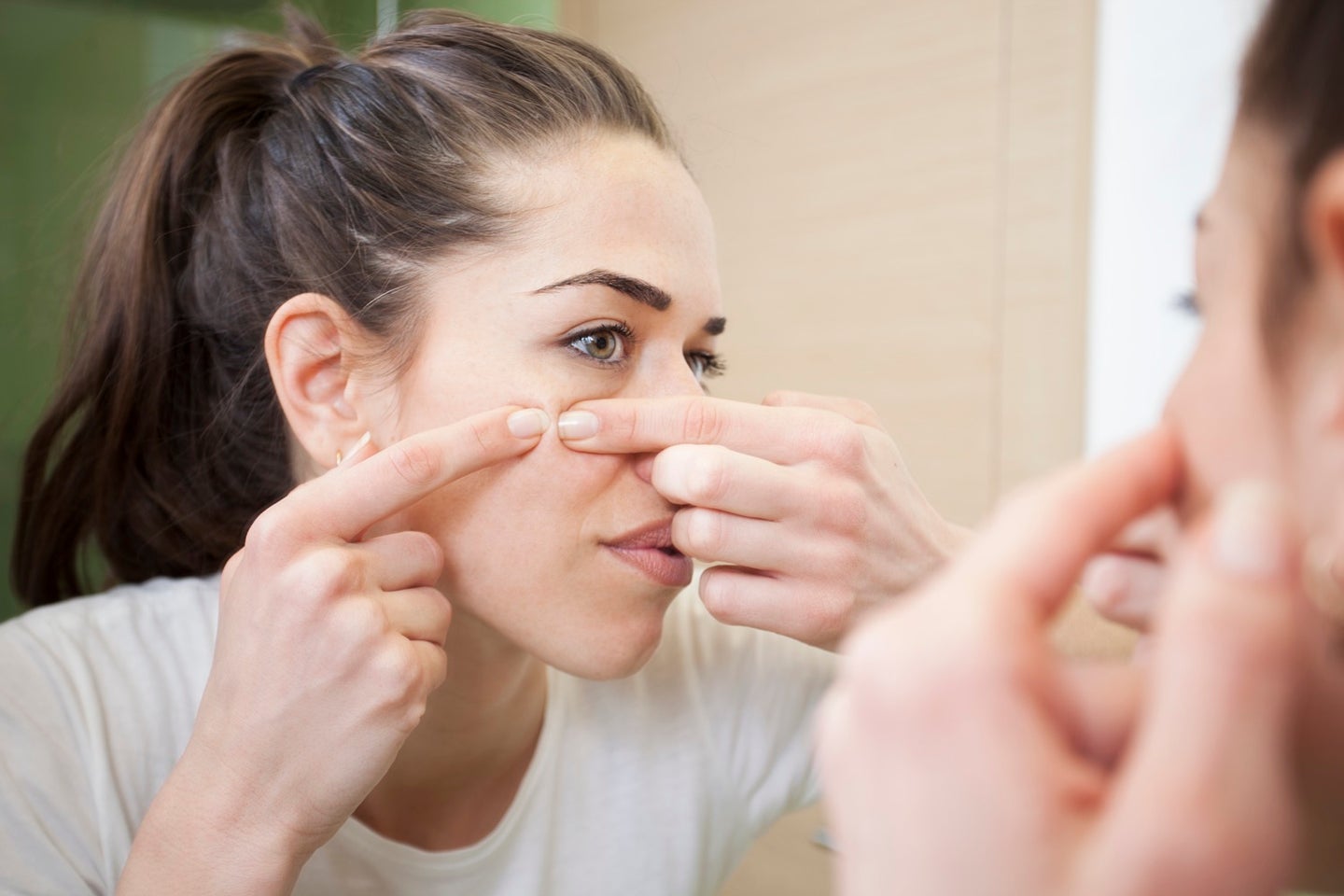 The typical pimple is caused by clogged oil glands or bacteria in our skin, and while most pimples aren’t harmful, they can become infected (and painful), especially when they’re opened up to the outside environment. Still, so many of us cannot resist pinching them away.

To get to the root of the pimple popping divide, we can look to one of our most basic emotions: disgust.

Disgust evolved to protect humans from infectious diseases and poisons, Daniel Kelly, professor of philosophy at Purdue University and author of a book called Yuck! The Nature and Moral Significance of Disgust, told PopSci in an interview. For instance, we’ve learned to avoid common repulsive items, like rotten meat or poop, because they can contain microbes that are known to make us sick if ingested. Developing this internal ick-detector was important in keeping our ancestors alive, Kelly says, because we can’t actually see the tiny pathogens like viruses and bacteria that make us sick.

However, some bodily fluids like blood, spit, or pus—including the oily ooze from a pimple—are often only seen as disgusting when they come out of our bodies. In this case, Kelly explains that our disgust is acting  like a bouncer enforcing a no re-entry policy: Once our bodily fluids are out in the big bad world, they can potentially be contaminated by bacteria or other pathogens, so we don’t want to put them back inside of us. This aversion towards disease is also why people recognize the tell-tale signs of sickness in others around them, like sweating or coughing.

But unlike snotty noses, you might be surprised to find that squeezing those angry whiteheads doesn’t always evoke the same yuck reaction—in fact, there’s a whole community of people that finds that final burst oddly satisfying.

Popping on the brain

We obviously don’t all react in the same way when we see pus coming out of a pimple. And on a basic, primal level, even popping fanatics get at least a little disgusted. It’s all about whether your enjoyment outweighs your instinctive revulsion.

There might also be levels to one’s love (or disgust) of poking those blemishes. Some people are into watching YouTube or TikTok videos of pimple popping, but wouldn’t be tempted to squeeze their own zits. Watching it happen to someone else through a screen controls exposure—the viewer is not in any real danger of coming into contact with potential pathogens. A similar phenomena can be seen when horror fans watch scary movies. No matter how frightening or gross a film is, we know a zombie isn’t actually going to pop up and eat our brains.

Even for people doing actual in-person popping, either on themselves or on someone else, there’s still an element of control involved. It’s not the same as suddenly coming upon an infected wound; while your conscious mind might immediately respond with an initial feeling of ick, your lizard brain and past experiences not getting sick from zit pus help you recognize that a simple pimple likely won’t put you in danger.

[Related: The mites that breed on our faces are getting clingier by the day]

Differences in our brains also help explain why some people like pimple popping more than others. How each person reacts to pimple popping depends upon their brains, according to a 2021 paper in the journal Behavioural Brain Research. Scientists from the University of Graz in Austria had 38 popping enjoyers and 42 non-enjoyers watch 96 video clips that showed either pimple popping, water fountains, or steam cleaning. The fountain videos were used as controls because water coming from a fountain mimics pus coming from a zit, according to the researchers, while the steam cleaning videos served as oddly satisfying controls.

The researchers had study participants complete a survey before the experiment to determine their pimple popping enjoyment, their disgust sensitivity, and their reward and punishment sensitivity. Then, participants watched the clips while their brain activity was measured in a functional magnetic resonance imaging, or fMRI, machine.

The team found that people who liked zit squeezing videos reported a greater sensitivity to being rewarded, as well as better disgust regulation skills, than those who didn’t. In other words, pimple popping fans were more likely to feel arousal when rewarded with the satisfaction of pus spurting from a pimple and could better modulate the amount of disgust they felt while watching. Those self-reported qualities matched up with what the researchers found in the brain imaging part of the study.

[Related: What is a hangover? And can you cure it?]

Don’t worry pimple popping fans—just because you have a higher tolerance of disgust for zit squishing doesn’t mean you’re less likely to pick up on actual harmful things that will make you sick. Plus, even the most hardcore pimple popping fans still have that innate ick-response: the 2021 paper found that ultimately all participants were at least a little grossed out by pimple popping.

To pop or not to pop

Unfortunately for popping fans, dermatologists say you really shouldn’t DIY this particular task, regardless of how tempting it is to get rid of unsightly zits. Pimple popping breaks the skin and can cause infections and scarring. Blackheads and whiteheads should be left alone, although home treatments like benzoyl peroxide can help them clear up more quickly. If you’ve got a Vesuvius-level whitehead you really want to get out, go to a dermatologist because they’re trained to handle extractions properly. If you still have a squeeze craving, there are plenty of videos around the internet to satisfy you safely.