You’ve probably never heard of terahertz waves, but they could change your life

Welcome to the electromagnetic dark zone. 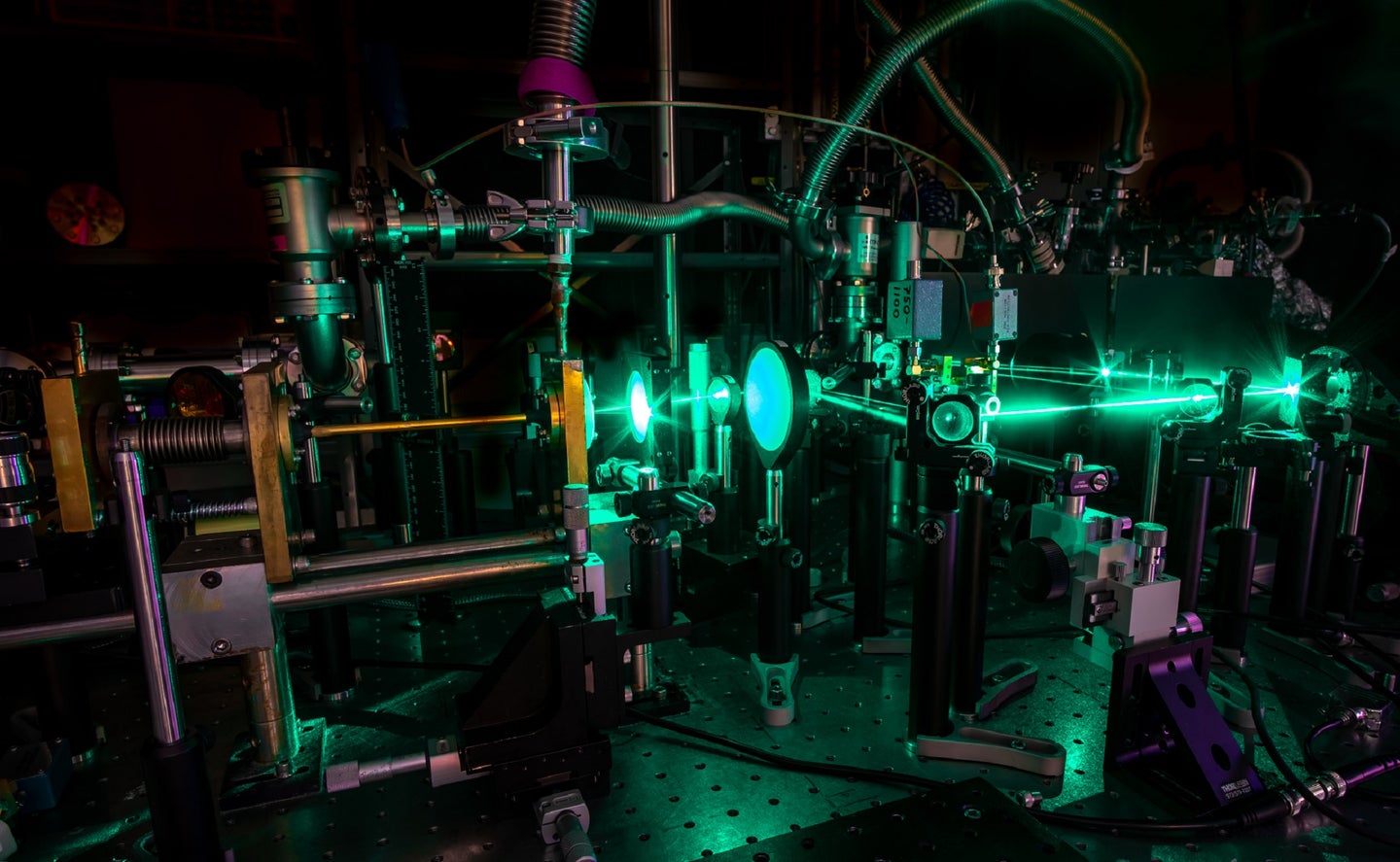 Engineers from Harvard, MIT, and the US Army created this experimental terahertz laser setup in 2019. They are among the few to do so. Arman Amirzhan, Harvard SEAS
SHARE

There’s a gap on the electromagnetic spectrum where engineers can not tread.

The spectrum covers everything from radio waves and microwaves, to the light that reaches our eyes, to X-rays and gamma rays. And humans have mastered the art of sending and receiving almost all of them.

There is an exception, however. Between the beams of visible light and the blips of radio static, there lies a dead zone where our technology isn’t effective. It’s called the terahertz gap. For decades now, no one’s succeeded in building a consumer device that can transmit terahertz waves.

But some researchers are slowly making progress. If they stick the landing, they might open up a whole new suite of technologies, like the successor to Wi-Fi or a smarter detection system for skin cancer.

The mystery of the terahertz

Look at the terahertz gap as a borderland. On the left side, there are microwaves and longer radio waves. On the right side lies the infrared spectrum. (Some scientists even call the terahertz gap “far infrared.”) Our eyes can’t see infrared, but as far as our technologies are concerned, it’s just like light.

Radio waves are crucial for communication, especially between electronic devices, making them universal in today’s electronics. Light powers the optical fibers that underpin the internet. These realms of technology typically feed off different wavelengths, and uneasily coexist in the modern world.

[Related: An inside look at how fiber optic glass is made]

But both realms struggle to go far into the terahertz neutral zone. Standard electronic components, like silicon chips, can’t go about their business quickly enough to make terahertz waves. Light-producing technologies like lasers, which are right at home in infrared, don’t work with terahertz waves either. Even worse, terahertz waves don’t last long in the Earth’s atmosphere: Water vapor in the air tends to absorb them after only a few dozen feet.

There are a few terahertz wavelengths that can squeeze through the water vapor. Astronomers have built telescopes that capture those bands, which are especially good for seeing interstellar dust. For best use, those telescopes need to be stationed in the planet’s highest and driest places, like Chile’s Atacama Desert, or outside the atmosphere altogether in space.

The rest of the terahertz gap is shrouded in mist. Researchers like Hu are trying to fix this, but it isn’t easy.

When it comes to tapping into terahertz waves, the world of electronics faces a fundamental problem. To enter the gap, the silicon chips in our electronics need to pulsate quickly—at trillions of cycles per second (hence a terahertz). The chips in your phone or computer can operate perfectly well at millions or billions cycles per second, but they struggle to reach the trillions. The highly experimental terahertz components that do work can cost as much as a luxury car. Engineers are working to bring the prices down.

The other realm, the world of light, has long sought to make devices like lasers that could cheaply create terahertz waves at specific frequencies. Researchers were talking about how to make such a laser as early as the 1980s. Some thought it was impossible.

But MIT’s Hu didn’t think so.“I knew nothing about how to make lasers,” he says. Still, making this kind of laser became his quest.

Then in 1994, scientists invented the quantum cascade laser, which was particularly good for making infrared light. All that Hu and his colleagues needed to do was push the laser out to the longer waves of the far infrared.

Around 2002, they succeeded in making a terahertz quantum cascade laser. But there was a catch: The system needed temperatures around -343 degrees Fahrenheit to actually fire. It also required liquid nitrogen to work, which made it difficult to use outside the lab or cryogenic settings.

In the two decades since, that temperature threshold has crept up. The latest lasers from Hu’s lab operate at a balmier 8 degrees Fahrenheit. That’s not quite room temperature, but it’s warm enough that the laser could be chilled inside a portable refrigerator and carted out of the lab. Meanwhile, in 2019, a team from Harvard, MIT, and the US Army created a shoe box-sized terahertz laser that can alter molecular gas.

In the time it took Hu to finetune his laser, electronics have made progress, too. Advances into how chips are built and the materials that go into them have pushed them to run faster and faster. (A nanoplasma chip made by a group in Switzerland in 2020 was able to transmit 600 milliwatts of terhertz waves, but again, only in the lab.) While electrical engineers want to see more progress, designing terahertz components isn’t the distant dream it once was.

“Now we can really make really complicated systems on the chip,” says Ruonan Han, an electrical engineer at MIT. “So I think the landscape is changing.”

“What’s happened over the last thirty years is that progress has been made from both ends,” says Mark Sherwin, a physicist at the University of California, Santa Barbara’s Terahertz Facility. “It’s still relatively rare, but I would say, much, much, much more common … and much easier.”

Such decades-long timescales are common in a world where new technologies whirl about in cycles of hype and disappointment. Amongst engineers, terahertz is no exception.

The future of terahertz technology

For now, the two realms trying to enter the terahertz dark zone from either end remain largely separate. Even so, they’re giving the science world new abilities in a broad range of disciplines.

Some of those abilities could speed up communication. Your Wi-Fi runs on microwaves: Terahertz, with higher frequencies than microwaves, could forge a better connection that’s orders of magnitude faster. Through a wire, it could also create a lightning-fast cross between USB and fiber optics.

Terahertz waves are also ideal for detecting substances. “Almost every molecule has a ‘fingerprint’ spectrum in the terahertz frequency range,” says Sherwin. That makes terahertz waves optimal for picking out chemicals like explosives and the molecules in medicines. Astronomers already use that ability to look at the chemical compositions of cosmic dust and celestial objects. Closer to Earth, Han envisions a terahertz “electronic nose” that could even discern odors in the air.

Those terahertz signatures also make the far infrared ideal for scanning people and objects. Terahertz waves can see through stuff that light can’t, such as clothes, with the bonus of avoiding potentially harmful ionizing radiation like X-rays. Security screeners have already shown interest in the tech.

The one scanning characteristic that terahertz waves lack is that they can’t get through water—in the air and in the human body. But that’s no obstacle for medicine. A doctor could use a terahertz device to screen for subtle signs of skin cancer that X-rays might miss; or a neuroscientist might use it to scan a mouse brain.

Hu thinks the research is still early days. “If we can develop tools that can really see something and not take forever to scan some area, that could really entice potential practitioners to play with it,” he says. “That’s an open-ended question.”

Much of the terahertz gap remains a blank spot on researchers’ maps, which means equipment using the coveted far infrared waves just isn’t common yet.

“Researchers really don’t have a lot of chances to explore what [terahertz waves] can be good at,” says Han. So, for now, the faster, more sensitive world inside the gap remains largely in their imagination.