Nearby chickens and cows contributed to the contamination of peaches that led to a large outbreak of salmonella. 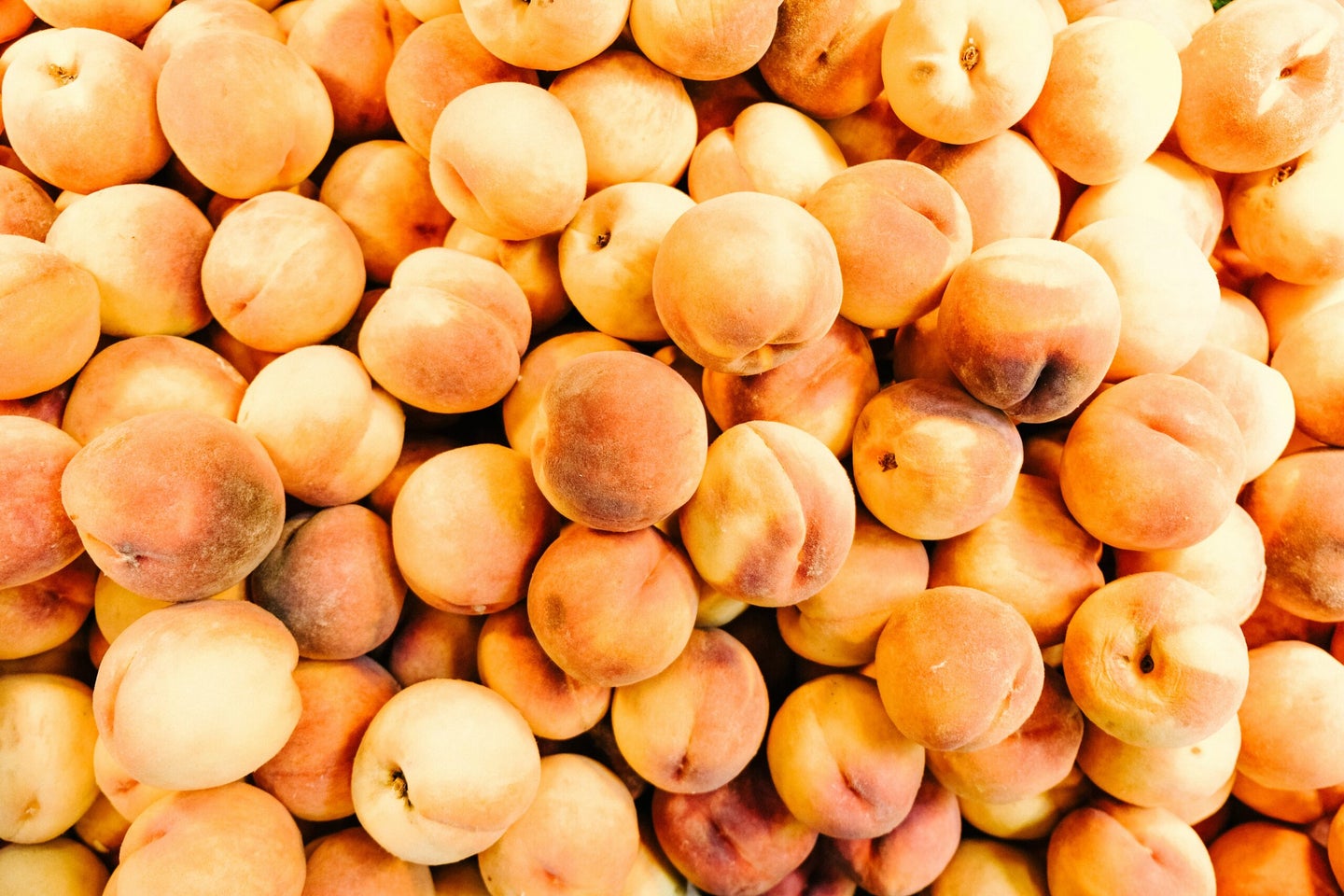 Peaches are a surprising and infrequent source of salmonella. Unsplash
SHARE

What caused last summer’s national recall of peaches? According to recent findings from the Food and Drug Administration, dust blown into orchards from nearby livestock.

From late June to August of last year, 101 people ended up sick with salmonella, a food-borne bacteria more commonly associated with raw cookie dough, eggs, and reptiles. No one died, but 28 were hospitalized. (Different types of salmonella cause different diseases, including typhoid fever. This outbreak involved the more common presentation colloquially known as salmonella, which involves several days of diarrhea and fever.)

About half of all salmonella outbreaks are linked to produce, as we’ve written before—but peaches are, according to the FDA, a new source. Before last year, peaches had been the culprit in three national food-borne outbreaks, including a 2014 listeria outbreak that led to national recalls. Still, none involved salmonella, the second-most common cause of food poisoning.

But fruit, and especially frozen fruits, have increasingly been linked to food borne disease, including hepatitis A outbreaks from strawberries and pomegranates.

Peaches and other fruit might seem like surprising sources of bacteria, says Alida Sorenson, a food safety supervisor with the Minnesota Department of Agriculture who has tracked fruit outbreaks before. “But it can happen. We had a weird one where we had listeria growing on caramel apples.”

The national investigation began last August, as dozens fell ill. Interviews with about 60 poisoned people showed that about 50 of them had eaten fresh peaches soon before getting sick, and the FDA issued a recall that hit everything from Kroger to Food Lion to Walmart.

From there, FDA investigators traced peaches up the supply chain, which led to the California grower and packer Prima-Wawona that had supplied “the majority of peaches associated with points of service during the timeframe.” A parallel Canadian investigation pointed in the same direction.

[Related: Don’t worry about eggs—these other foods are way more likely to give you Salmonella]

But that investigation also leaves some outstanding questions: the investigators didn’t actually find evidence of the guilty strain of salmonella on the leaves or fruits of the orchard. Much as epidemiologists have used genetic sequencing to trace the spread of COVID variants across the US, it’s become commonplace to hunt for a specific lineage of a food-borne illness using a DNA trail.

No traces showed up on the orchard itself, but that doesn’t mean that investigators didn’t find any salmonella. As it turns out, there’s a poultry plant and a dairy farm adjacent to several of the fields.

Investigators found salmonella strains on trees facing both of those sites. And, tellingly, the type found near the poultry barns was almost identical to previously identified chicken diseases, while those near the dairy matched cattle diseases, indicating that the bacteria had spread from each animal to nearby trees.

The running theory, according to the FDA, is that “fugitive dust” from those livestock operations blew in on the wind, carrying bacteria with it.

That’s not exactly surprising, Sorenson says. “With any produce grown outside, it’s kind of unavoidable. We’ve seen [E. coli] outbreaks before associated with deer walking through the area, or birds that poop on the produce or in the lettuce as they fly over. In the Southeast, we’ll see a lot of salmonella associated with reptiles.”

Dust has been a research focus since the early 2000s because chick-raising operations are known to produce tons of salmonella-laden detritus. This type of interaction between large-scale produce and animal farming has also led to E. coli outbreaks when animal-contaminated water has been used to irrigate crops like spinach. The FDA findings themselves recommend that “all farms… be cognizant of and assess risks that may be posed by adjacent and nearby land uses.” But beyond monitoring for that contamination, it doesn’t suggest that there’s a lot to be done.

“There are way more outbreaks going on than we detect or know about,” says Sorenson. “Smaller ones, associated with smaller farms, where only a few people get sick. It’s just a matter of when there’s a big company with a lot of product and a lot of people get sick.”

(The CDC estimates that for every reported case of salmonella, seven go undetected.)

Land use, along with the increasing global reach of those potentially contaminated crops, is one reason that these surprising outbreaks are becoming more common. The other, more hopeful reason, says Sorenson, is that public health officials have gotten better at detecting outbreaks.

According to a 2017 research survey on salmonella epidemiology, open-ended interviews have made investigators better at catching surprise culprits, like peaches. And genetic surveillance allows investigators to quickly connect new outbreaks to previous sources of contamination. “We’re finding things that we wouldn’t have found before,” Sorenson says. “We can say, ‘oh, we tested this chicken, and then we looked back at historical data, and there was an outbreak that matched this. Wow, maybe this chicken was why that outbreak happened.’ We can look at things in reverse and say, oh, that might be an ongoing issue.”