Their courtship flights bend the barriers of physics in nature. 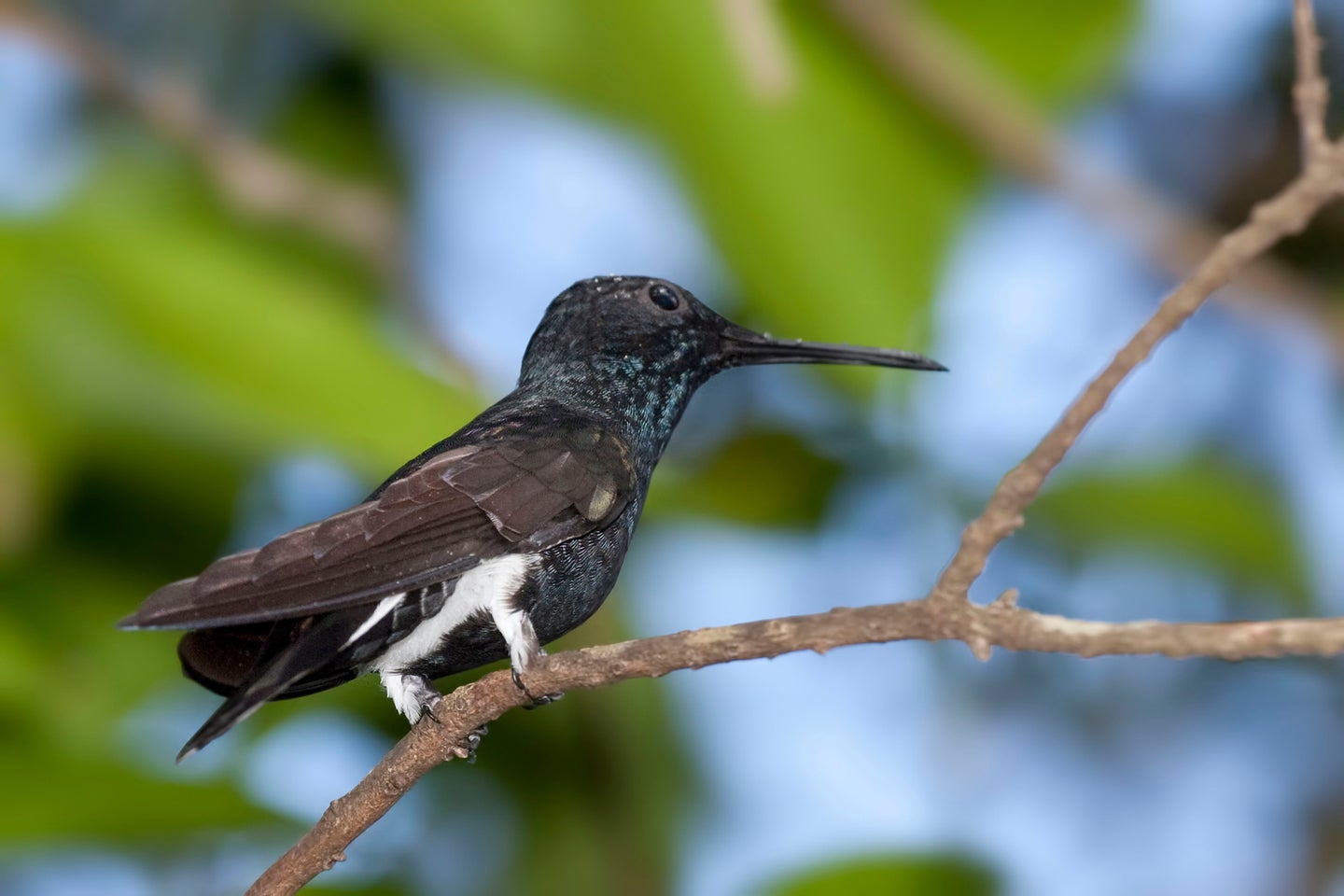 The male Black Jacobin "sings" at higher frequencies than most any other creature, all with the help of its tail feathers. hstiver/Deposit Photos
SHARE

Excerpted from The Glitter in the Green: In Search of Hummingbirds by Jon Dunn. Copyright 2021. Available from Basic Books, an imprint of Hachette Book Group, Inc.

Some birders feel uneasy about seeing hummingbirds at feeders—there’s a feeling that it’s somehow too easy. Real birding should be difficult and challenging, the sort of activity that involves hardship and infers some sort of superior caliber to the birders in question. Real birders, in the neotropics, suffer for their birds, and see them only fleetingly. For many years antpittas were the ultimate birder’s bird in South America—notoriously shy and skulking creatures of dense forest understory that asked a lot of anyone who wished to catch a glimpse of their kind. Admitting to enjoying hummingbirds could elicit scorn from their disciples. Hummingbirds? They’re just too easy. You just look for them at feeders. They’re plastic.

This condescension had dimmed somewhat in recent years, partly I felt as a consequence of the extensive worldwide use of playback of bird calls to obtain acceptable views of almost every species of bird and, in the neotropics, the burgeoning number of antpitta species that could now be guaranteed at feeding sites where locals scattered earthworms early every morning to the local antpittas’ considerable gustatory appreciation. If other, drabber bird families could be readily lured into the open by playback or seen at feeding stations, there was no shame in looking for arguably the most colourful and dynamic family of all at hummingbird feeders.

The monochrome jacobins that whirred and buzzed and jousted around me had a claim to fame that I would have to accept at its word, for it was one that I could neither see nor, in particular, hear for myself. I had come to the Brazilian forest armed with little more equipment than my binoculars and camera. When Claudio Mello, a behavioral neuroscientist from Oregon Health and Science University, visited the forest in 2015 he came armed with a battery of sensitive microphones and recording equipment usually used to record the high-frequency calls of bats, and a hypothesis he was curious to examine. Years previously, when conducting research in the region, he had heard a high-pitched sound on the very edge of hearing—a sound that he concluded, amidst the clamor of life in a Brazilian forest, probably came from a hummingbird rather than an insect or a tree frog. He could not, however, be sure of that—hence the microphones.

What Mello’s equipment recorded was nothing short of remarkable. The black jacobins were indeed uttering high-frequency calls—but at a level that beggared belief. Most birds hear in the range of two to three kilohertz. The human ear typically hears noises in the range of one to four kilohertz. The black jacobins, meanwhile, were repeatedly broadcasting calls above ten kilohertz and up to fourteen kilohertz, way beyond the regular range known for any bird, let alone a small hummingbird.

This was widely reported as black jacobins uttering the highest-pitched calls of any bird in the entire world. That was not strictly true, as Mello’s paper describing the black jacobins’ calls was careful to point out—that accolade appeared to belong to another hummingbird, the blue-throated hummingbird, whose song included elements that exceeded a mighty twenty kilohertz. However, there was no evidence that the blue-throated hummingbirds could hear anything beyond seven kilohertz, while the black jacobins’ high-pitched calls were not occasional elements in an otherwise normallypitched song—they were vocalizing almost exclusively above ten kilohertz.

One has to assume, therefore, that they can hear their own kind, but why have they evolved a call that was so far out of the range of hearing for the remainder of birdkind?

Mello hypothesized that this might be an adaption to their biodiverse surroundings—Black Jacobins are found in a geographic range that includes upwards of forty other hummingbird species and subspecies, not to mention myriad other voices in the forest. Perhaps they evolved to have their own private frequency, one at which there was literally not so much background noise. Some Australian geckos are known to have exceptionally high-frequency calls and hearing, while the hole-in-the-head frog, a species of frog endemic to Borneo, communicates entirely in the ultrasonic range up to thirty-eight kilohertz. If reptiles and amphibians could find evolutionary advantage in communicating in high frequencies, it seems logical to suppose that some birds may have done so too.

While black jacobins had elected to shout very loudly to catch one another’s attention, another hummingbird species had evolved to let their feathers do the talking. Anna’s hummingbird, the species that, in the US, is expanding its range north on the coattails of climate change, has a courtship display flight that at first glance is merely visually arresting—the male bird ascends some thirty meters into the air above his prospective partner, tucks his wings into his body, and then plummets in a fast dive towards her. He pulls up at the last possible moment, fanning his tail as he does so, and emitting a loud chirp noise.

Scientists, using high-speed video cameras, have established that the chirp is emitted not from his syrinx, or vocal organ, but instead from his tail. The outer tail feathers of the male Anna’s hummingbird have a trailing van that vibrates as the air passes through it at speed, creating the chirp sound—the birds are singing with their tails. If that were not marvelous enough, further study of the Anna’s hummingbird courtship dive has revealed that during the dive phase, the birds attain an average velocity of 385 body lengths per second, the highest known length-specific velocity attained by any vertebrate.

I had always assumed that peregrine falcons were the masters of the skies, but it transpires that a humble hummingbird can justly claim that title. The scientist behind this latter revelation, Christopher Clark of the Museum of Vertebrate Zoology at Berkeley, had a further revelation to make. He observed that at the point at which the hummingbirds pull up from their dive, their chirping tails fanned, they experienced accelerations almost nine times greater than gravitational acceleration. These forces are the highest known for any vertebrate species undergoing a voluntary aerial maneuver, with the exception of jet fighter pilots.

Fighter pilots, of course, have the benefit of special G-suits to help them to counteract the considerable physiological effects of pulling 9G. The Anna’s hummingbirds, on the other hand, have only a suit of feathers with a pleasing metallic raspberry-red gorget and head.