There’s no such thing as an expanding bullet 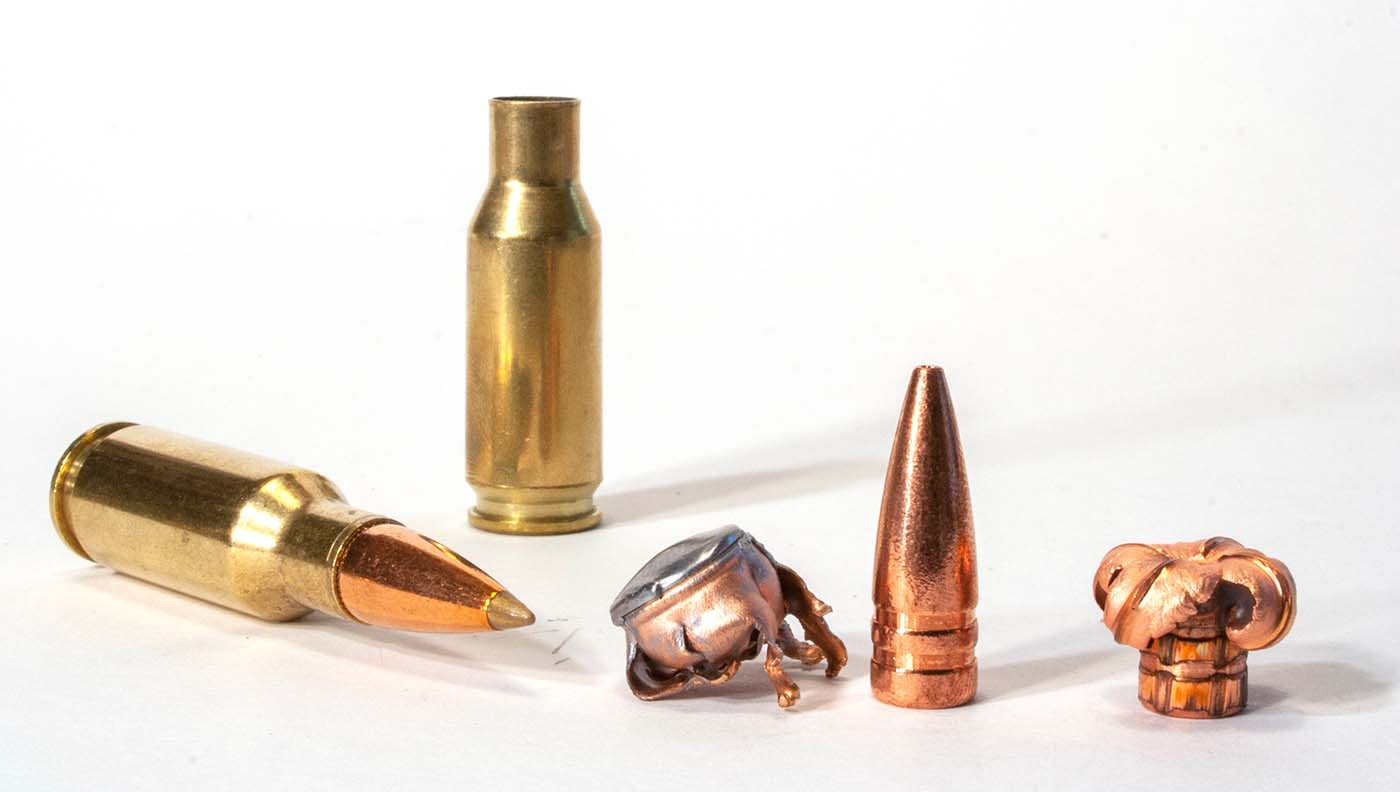 Most bullets don't expand—they deform, which means they change shape but not mass. Richard Mann
SHARE

Let’s get something straight right away. Bullets do not really expand. For something to expand it has to become larger or more extensive. The front end of bullets do seem to get larger as they penetrate, but in truth they are only changing shape. In fact, most so-called expanding bullets lose mass as they deform; it’s kind of hard for a bullet to lose mass and become larger at the same time. What bullets do is deform during impact, just like an apple deforms when it’s thrown against the barn door.

For bullets to deform, they need to have an impact velocity that’s capable of initiating the process. This will vary from bullet to bullet but generally speaking, a mono-metal bullet needs to impact at around 1800 feet per second (fps), while some bonded bullets can start to deform on impact at around 1600 fps, and jacketed lead-core bullets can often start the process with impact velocities as low as 1400 fps. But we’re only talking about minimum deformation. For bullets to fully deform into the little mushroom looking clumps we so much adore, they’ll need to impact at about 2000 fps or faster.

Deformation happens quickly with all bullets

In all but a few exceptions, bullet deformation starts immediately with impact. This is because the bullet’s best opportunity to deform is when velocity is highest. As the bullet meets resistance, it begins to slow, and the slower it goes the less force there is to make it change shape. Part of this slowing is a product of the bullet changing shape, as it becomes less aerodynamic. In other words, the more it deforms, the slower it goes, and almost immediately the velocity drops to a point where deformation is no longer possible.

This has been shown at the ballistic labs at Nosler and Barnes, where, for example, a 150-grain Barnes Triple Shock fired from a .308 Winchester impacted a block of 10 percent gelatin with a velocity of 2545 fps. After passing through 6 inches, the bullet’s velocity had dropped to around 1600 fps, which is well below a speed capable of causing further shape shifting. In fact, with mono-metal bullets the time between bullet entry and when the bullet stops deforming is less–though nearly unmeasurably less—than with conventional lead core bullets. This is because tough mono-metal bullets need more velocity to cause the deformation.

With conventionally jacketed lead-core bullets—which are thought to expand faster—once the bullet begins to deform, the soft lead-core and mangled jacket are exposed and continue to deform deeper into the animal. The bullet is losing velocity, but because these materials are softer (like the tomato), they continue to deform at slower speeds. In other words, it takes longer for a jacketed bullet to develop into its final deformed shape than it does a much tougher mono-metal or bonded bullet.

Some believe that all-copper or gilding-metal bullets take longer to change shape because they’re tougher, and that jacketed bullets deform faster because they’re more fragile. In fact, the opposite is true. For all practical purposes, the difference is immeasurable. But the truth is: There’s no such thing as a fast-expanding bullet. It takes all bullets almost exactly the same amount of time to shape shift. For one bullet to take more time to deform, it would need to speed up during penetration. But bullets and ballistics don’t work that way.