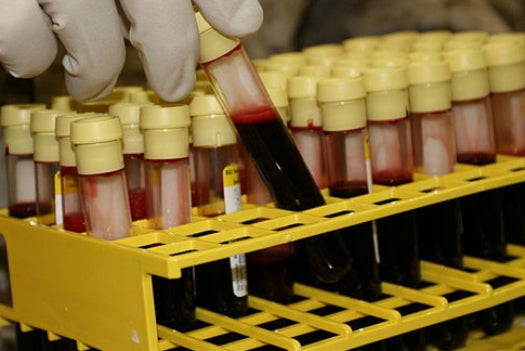 Suicide was responsible for more deaths than motor vehicle crashes were in 2009, but it’s not always easy for doctors to tell when someone is at risk. A new study from the Indiana University School of Medicine and the Indianapolis VA Medical Center has identified a series of biomarkers that could help identify those at risk for suicide with something as simple as a blood test.

Researchers have been looking to biomarkers–traceable biological characteristics, like a certain molecule or gene in the body–that could indicate that a person is at a greater risk for suicide. As of right now, a few different potential biomarkers for suicidal thoughts and behavior have been studied, but none are being used in psychiatric practice yet.

To discover potential changes in gene expression associated with suicidal thoughts, researchers looked at a group of 75 men they were already following as part of a longitudinal study on bipolar disorder. Over the course of multiple lab visits, nine of the men went from having no sign of suicidal thoughts at all to having significant suicidal thoughts. By looking at what changed in their blood and comparing it to the blood of demographically similar men who died from suicide, the researchers were able to pinpoint six likely biomarkers.

“If you ask someone who is intent on committing suicide, they might not tell you [of their intentions],” explains co-author Alexander Niculescu, an associate professor of psychiatry and medical neuroscience at the Indiana University School of Medicine. Niculescu and his colleagues narrowed the list of potential biomarkers with something called Convergent Functional Genomics.

“It’s kind of like Google page rank–the more links to a page, the higher it gets prioritized in your search list,” Niculescu says. “Same thing with this approach.” For the candidate genes in this study, more independent lines of evidence meant a higher likelihood that the gene would be a biomarker for suicide. They cross-matched the biomarkers they found with previous studies to see if other scientists had found additional links to that gene expression and suicide.

Once the researchers had identified six likely biomarkers, they studied a group of 42 bipolar men and a group of 46 schizophrenic men to see if the biomarkers could predict whether the men would be hospitalized for reasons related to suicide. “Indeed those markers did predict hospitalization for suicide,” Niculescu says, though the effect wasn’t as strong among the schizophrenic group. This indicates the biomarkers may be able to predict suicide risk even years later.

The strongest biomarker they found was the level of an enzyme called SAT1 in the blood. Previous studies have looked for suicide biomarkers in cerebrospinal fluid, but taking spinal fluid is a painful and arduous process. Other studies have pointed to brain-derived neurotrophic factor, or BDNF, a type of protein involved in neuron growth, as a likely suicide biomarker.

This study was limited by the fact that its sample was a very small, specific group of subjects–all nine were Caucasian men. The results will need to be expanded to a larger and more demographically diverse set of people.

The eventual goal is to be able to test psychiatric patients for these biomarkers, but Niculescu says “these markers by themselves are not exclusively going to determine if somebody is suicidal.” Other clinical and risk factors would need to be taken into account, since not every high-risk patient will necessarily commit suicide, but being able to intervene with counseling or hospitalization when someone is at great risk could save lives. “A million people worldwide die each year from suicide,” Niculescu says. “It”s a preventable tragedy if we have the right tools.”

The full study is published online in Molecular Psychiatry.