How Post-Earth Humans Will Survive In Space [Infographic]

This diagram from 1963 imagines how future humans will adapt to hostile environments. 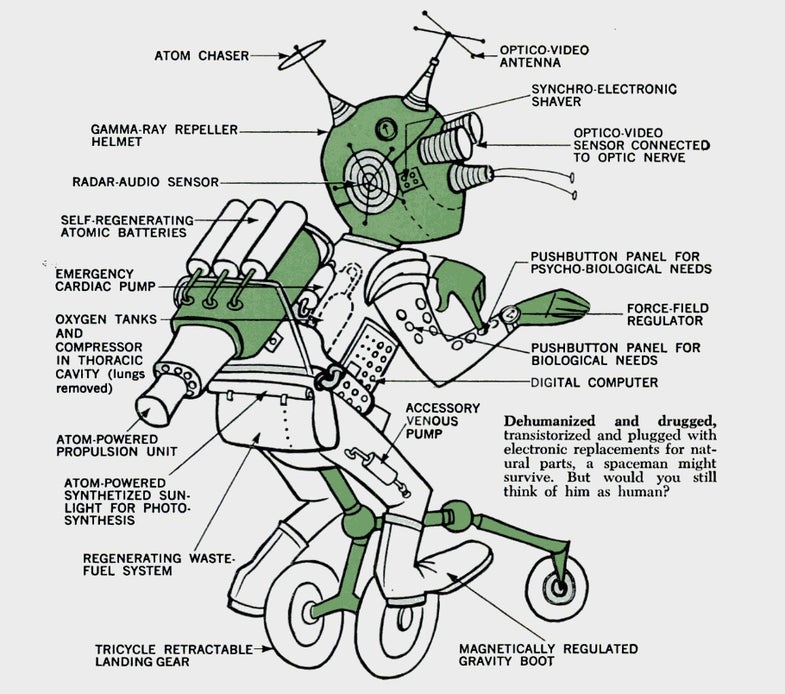 “The wheel, the ski, the kayak, the sports car—pure geometry in motion,” wrote aviation researchers Toby Freedman and Gerald S. Lindner in the November 1963 issue of Popular Science. “No doubt the engineers of these perfect and symmetrical structures beat their heads against the wall when told they had to squeeze in a passenger.” With manned space flight imminent and a nuclear holocaust looming, the two physicians argued that evolution had had its way with humanity long enough; it was time to tackle human frailty with science.

“Instead of modifying the ship, modify the man,” Freedman and Lindner declared. Citing a recent successful kidney transplant in England, they suggested that soon humans will opt for prosthetic devices over natural hands and will “exchange their failing hearts and livers the way we change tires after 30,000 miles.”

The image above is of course a caricature of these far-sighted ideas. In contrast to a spaceman whose biological functions have been replaced with electronic ones, Freedman and Lindner foresaw a future human who looks mostly normal but is stronger and faster and requires less food and oxygen. “The moment we say some biological adaptation is impossible, we find it somewhere in the animal kingdom,” they wrote. “It isn’t the science-fiction fantasists who are being unrealistic, but the conservative scientists.”

Fifty years later, scientists and engineers still rue the limitations of the human body. The biggest obstacle to high-speed travel, for instance, is the delicacy of our flesh and blood.

But some biologists believe that 3-D printed body parts could eventually produce the kind of optimized human Freedman and Lindner dreamed of in 1963.

Read the full story in the November 1963 issue of Popular Science. See Editor-in-Chief Jacob Ward discuss the limits of the human body on August 17 at the 2013 Nerd Nite Global Festival in Brooklyn, NY.