Thinking "America is the best country in the world" doesn't make you that welcoming to other groups, it turns out. 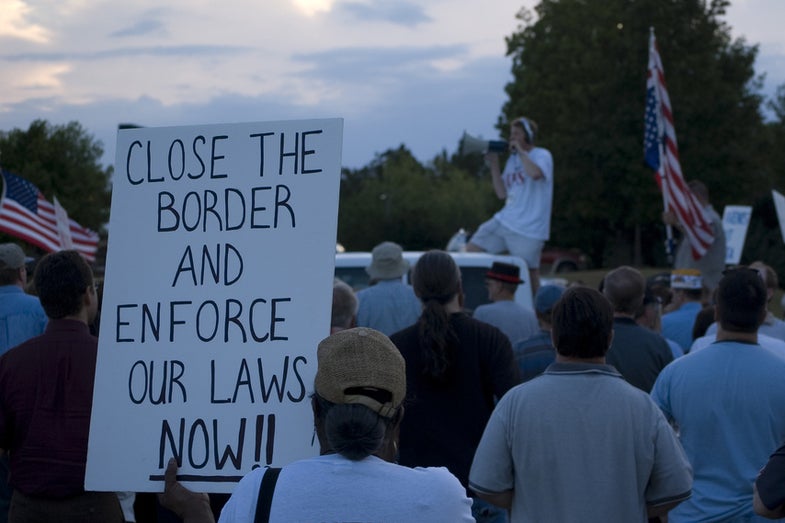 People who have an inflated sense of superiority about being an American are more likely to have negative attitudes toward undocumented immigrants from countries like Mexico, Cuba and Guatemala, according to a new study from the University of Texas at Arlington.

It found that a combination of group-level narcissism, or feeling an inflated sense of superiority on a collective level, combined with strong national in-group identification—when a person’s identity hinges on being part of a group like Americans—may cause negative attitudes towards undocumented Latino immigrants.

“When you look at the rhetoric surrounding undocumented, Latino immigrants in the United States, the perspectives vary widely—from those who characterize undocumented immigrants as criminals to those who support expanding full citizenship rights,” lead author Patricia Lyons says in a press statement. “We were interested in understanding how and why attitudes varied so widely from a psychological perspective.”

Basically, group narcissists (people who agreed with statements like “If America ruled the world it would be a better place” and “America is the best country in the world”) were more likely to express negative attitudes about immigrants, as measured by a survey. Interestingly, people with strong in-group identification but low levels of group narcissism did not hold particularly negative attitudes.

Narcissism is characterized by not only high self-esteem, but the need to constantly feed that self-esteem with the admiration and praise of others. Group narcissism leads to feelings of superiority and entitlement, as well as the need for praise for the collective group, not just on a personal level. It’s also associated with hostility toward other groups when that superiority seems threatened. The researchers suggest that perceived threats to jobs, resources or even the cultural norms of a country could be behind strong anti-immigrant feelings.

A somewhat disturbing tidbit from the study:

Embedded in the debate over illegal immigration are fears surrounding the United States becoming a “brown” and bilingual nation, and changes to the culture and values that distinguish America from other nations. These deviations from traditional American customs and values may be perceived as not only threatening, but disrespectful to the superior status of American citizens

The study appears in the August issue of Hispanic Journal of Behavioral Sciences.