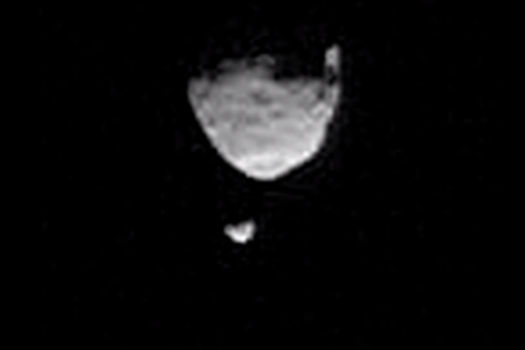 The larger of Mars’s two moons, the lumpy-shaped Phobos, is teensy, with a diameter less than one percent the size of our own moon’s. Here, you can watch it eclipse the planet’s even tinier moon, Deimos, as seen from NASA’s Mars rover Curiosity. In real time, the Pac-Man-esque transit took 55 seconds, but it’s sped up to about 11 seconds.

Mark Lemmon, a planetary scientist who helps operate Curiosity’s MasCam, turned the camera to Phobos and Deimos on Aug. 1, hoping to capture a set of images that could enhance our understanding of the moons’ orbits.

Phobos orbits closer to Mars than any other moon orbits to its planet, making its way around multiple times a day. Every century, it comes a few meters closer, and will probably crash into Mars or break up into a ring around the planet within the next 50 million years. It’s also possible that the orbit of Deimos might be getting farther from the planet, but researchers haven’t been able to determine that yet. These 41 images are the first taken from the Martian surface to show one moon eclipsing the other.