New Nano Structure Is The Thinnest Light-Absorber Ever

Nanosize light-absorbers break records for size and efficiency and could lead to better solar cells. 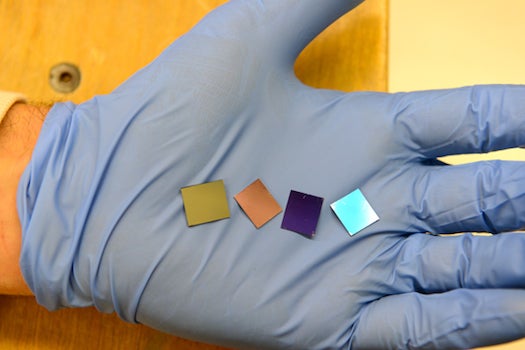 Consisting of billions of gold nanodots, these four squares are the thinnest light absorbers ever built. Courtesy of Mark Shwartz
SHARE

Scientists at Stanford University have managed to build light-absorbers that are thousands of times thinner than a sheet of paper. The nanosize structures are capable of absorbing close to 100 percent of visible light emanating from specific wavelengths. The material could be used to make cheaper, more efficient solar cells, among other things, the researchers say.

In order to construct the light-absorbers, ultrathin wafers were coated with trillions of round gold nanodots, essentially small spherical magnets. The wafers contain about 520 billion nanodots per square inch. The wafers were topped with an additional layer of film. The thickness of film determines the specific light frequency the absorber is designed to capture. In testing phases, the prototypes proved capable of absorbing 99 percent of light generated by a wavelength measuring 600 nanometers long.

The previous leading light-absorber technology required a foundational layer that was three times thicker to absorb the same amount of light.

The team believes the light-absorbers have the potential to significantly enhance the efficiency of solar cells. The small size of the structure as a whole forces energy charge carriers closer to one another, meaning it won’t take as long for the charge carriers to be collected and stimulate electrical current production. As the structures require less material, they could also make solar cell technology more affordable.

“We are now looking at building structures using ultrathin semiconductor materials that can absorb sunlight,” Stacey Bent, co-director of the Stanford Center on Nanostructuring for Efficient Energy Conversion (CNEEC) said in the same statement. “These prototypes will then be tested to see how efficiently we can achieve solar energy conversion.”