Gravity-Defying Particles Travel Up A Waterfall

The expected rules of physics are no match for a determined tea leaf. 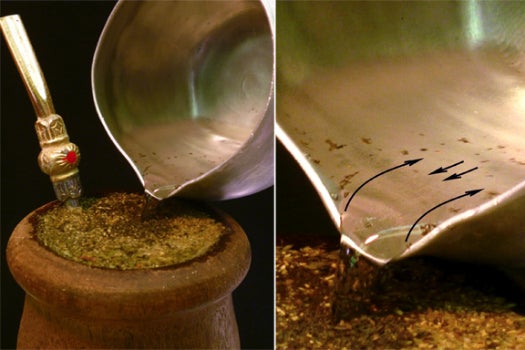 Back in 2008, Sebastian Bianchi, then a physics undergrad at the University of Havana in Cuba, was making tea when he noticed something that seemed to defy the most basic rules of physics: Tea leaves from his cup had floated upstream, against the pull of gravity, and ended up in his kettle.

Bianchi teamed up with other physicists from the University of Havana and Rutgers University to explore the phenomenon in the lab. They set up two tanks, one higher than the other, connected by a small channel of water and watched as particles of chalk and mate tea leapt upstream like randy salmon to end up in the higher tank, a centimeter above.

Watch particles of chalk move up a channel of flowing water:

The researchers attribute the gravity-defying tea travel to differences in the surface tension of the water. The results are published today in the Proceedings of the Royal Society A.

They think that this phenomenon could potentially cause contamination in pipettes of lab samples, as well pollutants moving upstream in slower rivers.