NASA’s Next Mars Rover Will Look For Past Life

It'll store and collect samples to (hopefully) one day return to Earth. 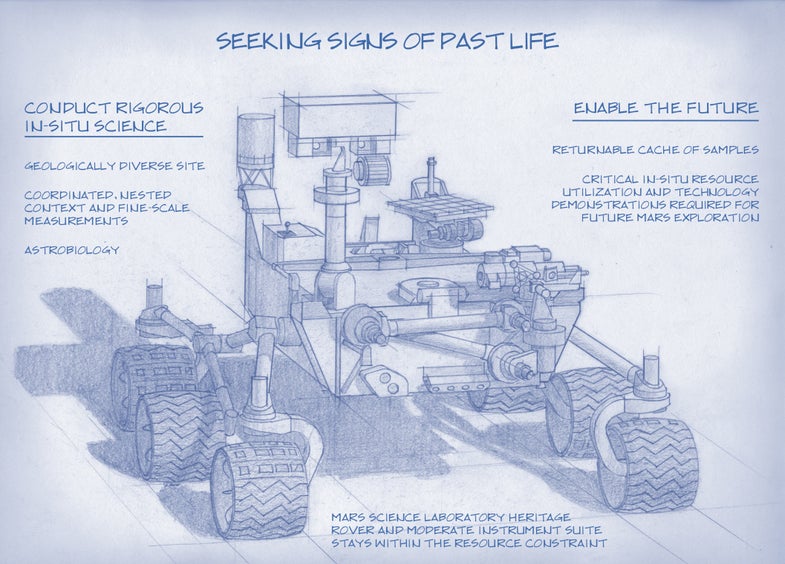 NASA’s next Mars rover mission, set for 2020, will search for signs of ancient life, according to a new report from the Mars 2020 Science Definition Team, a NASA-appointed group tasked with outlining the mission’s scientific goals.

The team calls this the “next logical step” in looking for signs of life on the planet, building on the discoveries made by the Spirit, Opportunity and Curiosity missions.

The new rover’s payload of scientific instruments will be selected through a competition, and include a drill to extract cores from rocks (rather than the powder the rover Curiosity extracts) and collect samples for a possible return to Earth in the future, though the methods for such a return haven’t yet been worked out. The rover itself will likely be designed much the same as Curiosity, with the same entry, descent and landing (EDL) system.

A prototype of the cache that could collect up to 31 core samples from Martian rocks for a future return to Earth.

“This mission represents a major step towards creating high-value sampling and interrogation methods, as part of a broader strategy for sample returns by planetary missions,” Jim Green, director of NASA’s Planetary Science Division, said in the agency’s statement.

Looking for past life on the planet, rather than current life, maximizes the potential research return, Lindy Elkins-Tanton, a member of the SDT team, told reporters. “If we were only looking for what microbes could be found on the surface in this place right now, that’s like a tiny snapshot of the history of Mars and the possibility of life,” she said, according to Space.com. “But if we look back through the rock record, we’re basically integrating over time and maximizing our chances of finding results.”