Mystery Animal Contest: Who Is This Long-Snouted Creature? 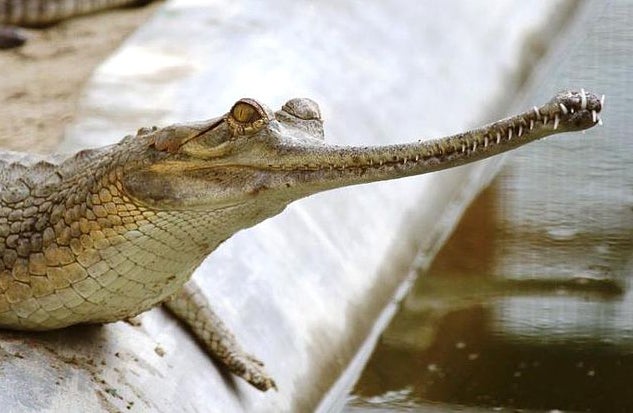 Update: The winner is…Seth Rosenthal, who correctly guessed that this creature is a gharial! The gharial is one of three crocodilian species native to India, along with the mugger crocodile and saltwater crocodile. It’s the rarest of all crocodilians (the group also includes alligators and caimans), and one of the rarest animals in the world, period. It’s critically endangered, with, at most, a couple hundred breeding adults left in the world.

And it’s a fascinating creature; the only crocodilian that relies entirely on fish for its diet, its long and narrow snout immediately identifies it. The smaller surface area of the snout reduces water resistance as it thrashes its head through the rivers to catch fish. It’s arguably the most aquatic of the crocodilians, too, and can’t actually walk very well out of the water. That’s awkward, because it’s huge, up to 20 feet long. It’s now illegal to kill gharials, but the outlook for the species isn’t looking good. So look at ’em while you can. Hi gharial!