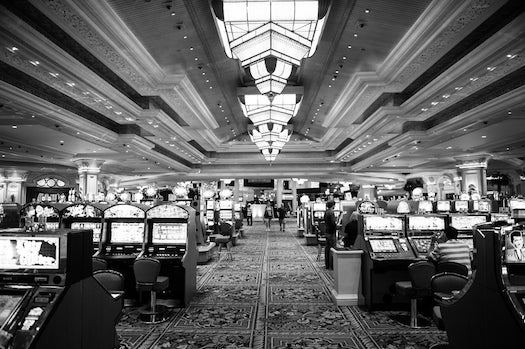 When you win a bet on a slot machine, the machine rewards you with a celebratory noise: that electronic string of notes saying, You’re a winner! Here is, like, 30 cents, probably. If you lose the bet, there’s usually not a noise.

But here’s the twist: modern slot machines let you bet on multiple lines, meaning you can still lose, even when you win. You might, for example, make a bet that recoups 10 cents of the 2 dollars you spent on the pull. When that happens, you still get the “winner” noise.

A new study examined how that affects gambling habits. Researchers from the University of Waterloo took a group of 96 people and had them play two different kinds of slot machines: one machine played music for both wins and fake wins, while the other machine only gave visual feedback for wins and fake wins.

The researchers measured skin conductance and heart rate responses while the subjects played the slots. After the subjects finished, they were asked which game they preferred and to estimate how many times they got more money back than they wagered.

Guess what? Slot machine designers are smart, and our brains are kind of dumb.

The players showed heightened physical response to the machine with sound, and told researchers it was a more enjoyable experience. For both machines, players exaggerated the percentage of bets they won, but with sound it was considerably higher: 24 percent to 15 percent.

Maybe buy some nice ear plugs if you want to play at the top of your game.