Scientists discovered the tiny clam crawling on California sea urchin spines. Its Linnaean name is Waldo, mostly for the sake of puns, I think. 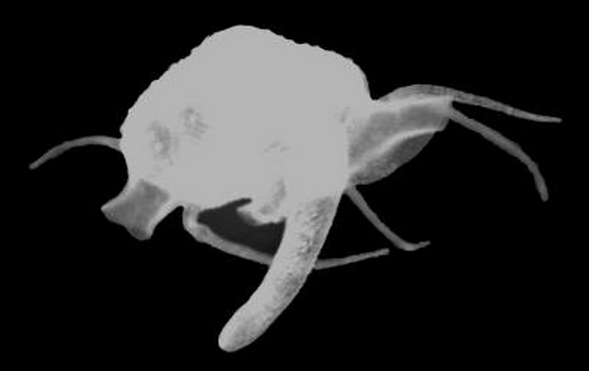 In the north Pacific Ocean, off the coast of Northern California, the Pacific Northwest, and British Columbia, the waters are cold and the animals are often large. Huge salmon and tuna, massive geoduck clams, thundering great white sharks, and 8-foot-long sea lions are common. But the newest species discovered is anything but: it’s a bizarre, thin-shelled clam that’s so small it lives among the spines of sea urchins.

Two scientists, Paul Valentich-Scott from the Santa Barbara Museum of Natural History and Diarmaid Ó Foighil from the University of Michigan’s Museum of Zoology, independently discovered the clam in 1989. While chatting, they realized that they had both been researching the same species, even though Valentich-Scott was working in Santa Barbara and Foighil was on Vancouver Island. Doctoral student Jingchun Li, also of the University of Michigan, finally did a DNA examination of the clam and was able to declare it a distinct new species, Waldo arthuri.

Waldo arthuri is a very tiny bivalve clam, boasting odd features like a thin, translucent shell and long, willowy tentacles. “This is a very peculiar animal,” said Valentich Scott. “They only seem to live on the spines of one type of sea urchin in a commensal relationship,” meaning the clam benefits (by getting protection, courtesy of the sea urchin’s spines) and the urchin is unaffected by the clam’s presence.

Its closest relatives are the other Waldo clams, like Waldo paucitentaculatus, which lives very far away, off the coast of Argentina.

You can read the whole paper here.