And America’s Unhealthiest Restaurant Meal Is…

A nutritional health lobbying group finds that the actual nutrition facts for some restaurant meals are much worse than the restaurant reports. 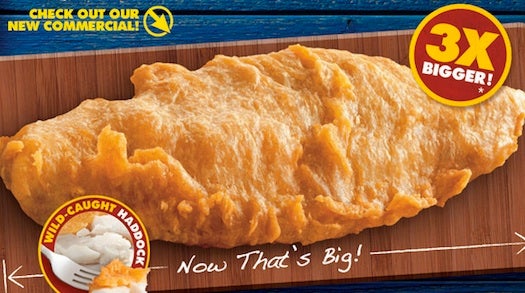 Like a tale-telling fisherman, fast-seafood restaurant Long John Silver’s may have exaggerated the size—and nutritional value—of its fish.

The lobbying group Center for Science in the Public Interest says it performed its own independent nutritional analysis of Long John Silver’s dishes and found less fish and more saturated fat and sodium than advertised.

In addition, the center has named Long John Silver’s “Big Catch” with a side of onion rings as the unhealthiest restaurant meal in America. Although other restaurant meals have more calories, the center says the Big Catch caught its attention because of its high amounts of trans fats. It also features nearly a day’s worth of saturated fat and more than a day’s worth of sodium.

All fish is naturally trans-fat free and contains healthy omega-3 fatty acids. The Big Catch’s haddock, in particular, has little saturated fat. So the meal’s high amounts of trans fats, saturated fat and sodium come from its battering and side dishes.

In a letter to the U.S. Food and Drug Administration, the Center for Science in the Public Interest used Long John Silver’s as an example to lobby for a ban on partially hydrogenated oils, which are a major source of trans fats in food in America. The group is involved in a variety of food-related lobbying, such as campaigns to remove junk food from schools and require nutrition labeling on menus. In 2006, the center sued KFC over trans fats in its meals.

Big Catch fish pieces are “seven ounces to eight ounces of 100 percent premium haddock,” chief marketing officer Charles St. Clair has said in press releases. But the Center for Science in the Public Interest found a Big Catch fish piece had 4.5 ounces of fish and three ounces of batter. In addition, the group found the restaurant undershot the amounts of trans fats, saturated fat and sodium it reports for its onion rings and hushpuppies, both of which may come with a Big Catch meal.

In response to my questions, Scottie Ellis, a spokeswoman for Long John Silver’s, emailed me a statement the company had prepared.

“We stand behind our published food data and will review any requests from CSPI that raise questions about our data,” it said. “Long John Silver’s offers a variety of meal choices including baked fish and shrimp that can satisfy almost every diner’s dietary choices.”

For its analysis, the Center for Science in the Public Interest sent a Big Catch basket with onion rings to Eurofins, a private, international food analysis company. Eurofins found the meal had 34 grams of trans fats. The U.S. government’s most recent Dietary Guidelines for Americans recommends as little trans fats as possible. The American Heart Association says trans fats consumption is linked with increased risk of heart disease, stroke and type 2 diabetes.

Eating too much saturated fat raises cholesterol in the blood, which in turn is linked with a higher risk of heart disease and stroke. Too much sodium, meanwhile, may lead to high blood pressure in some and it’s linked to risk for stroke, heart failure, osteoporosis and other diseases.

It should be easy for Long John Silver’s to nearly eliminate the trans fats, at least, according to the Center for Science in the Public Interest. Jurisdictions such as the state of California and the city of New York have banned artificial trans fats. In those places, Long John Silver’s foods are fried in canola oil and should have no trans fats.