Want To Study A Dragonfly? Put A Teeny Backpack On It

Strapped in for learning 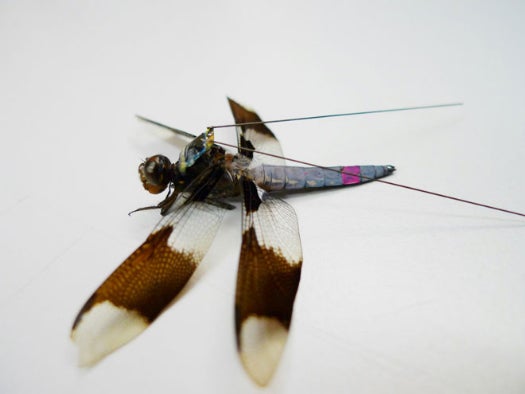 How do you figure out the way a dragonfly’s mind works? That’s the challenge for Anthony Leonardo, a neuroscientist at the Howard Hughes Medical Institute’s Janelia Farms Research Campus who studies the role neural circuits play in behavior. He’s currently exploring the neuroscience of how dragonflies and salamanders capture their prey.

To study the hunting behavior of dragonflies, Leonardo and his team needed to record how their neurons and muscles responded mid-flight. So they developed a teeny backpack for their flighty subjects, one that would amplify the signals from electrodes recording the dragonflies’ brain signals.

As Leonardo told Co.Create, “to load an insect up with gear is like dancing in a ballet wearing a backpack filled with rocks. You can put double the dragonfly’s body weight on these creatures and they can fly, but they won’t try to catch their prey.”

The final version of the insect-borne pack is light enough that the dragonflies aren’t dragged down by it. It weighs 40 milligrams, about 10 percent of a dragonfly’s weight, and is secured to its body with a little dab of superglue. It’s powered by radio waves gathered by the long antennae extending from the pack.

Once the dragonflies were strapped in for studying, the researchers set them loose in a room designed to look like a meadow, with turf and a pond–a plain white room stressed them out too much, and they spent too much time trying to escape rather than hunt down flies. In the artificial lushness of the fake meadow, Leonardo and his team could watch their subjects dart around on the hunt through high-speed infrared cameras.

Leonardo’s goal is to figure out how the dragonflies’ neurons translate the visual information of their surroundings and their prey into a definitive attack plan.