Naturally occurring genes cannot be patented, but synthetic ones can. 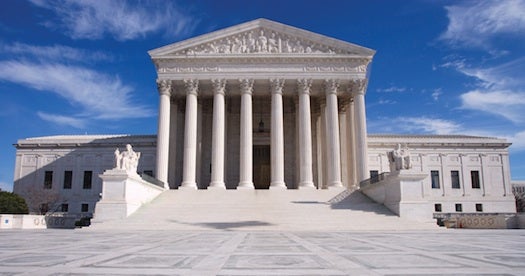 The U.S. Supreme Court finally ruled today on patenting breast-cancer genes. The ruling found that naturally occurring genes aren’t patentable. If you make a synthetic version, however, that is your own work.

“The Court’s decision strikes a middle ground that likely will not be particularly disruptive,” Tom Goldstein, a Harvard Law School professor and publisher of SCOTUSblog, wrote in his publication’s liveblog about the ruling.

Scientists from Myriad Genetics in Utah were the first to find and isolate BRCA1 and BRCA2, two major genes that affect people’s chances of getting hereditary breast, ovarian and other cancers. The company holds numerous patents relating to those discoveries, which opponents say is unreasonable, because genes are products of nature, not patentable inventions. The case made its way to the Supreme Court because one group—including doctors, researchers and patient advocacy organizations—has been challenging Myriad Genetics’ BRCA1 and BRCA2 patents since 2009.

Among Myriad’s patents are ones that say the company has the rights to any isolated BRCA1 and BRCA2 genes. That means it has the exclusive right to offer testing for those genes, since you gotta isolate ’em to test for ’em. Yes, those are the same tests that, for example, Angelina Jolie took before deciding to get a preventative double mastectomy.

The new ruling says that even when isolated, naturally occurring genes aren’t patentable because they’re a product of nature, just like Myriad Genetics’ opponents originally claimed. It doesn’t matter that Myriad Genetics invested a lot of money, time and talent into finding BRCA1 and BRCA2. “Groundbreaking, innovative, or even brilliant discovery does not by itself satisfy the §101 inquiry,” Justice Clarence Thomas wrote in the court’s opinion. §101 distinguishes between patentable inventions and un-patentable abstractions.

Nevertheless, some products from Myriad Genetics’ research into BRCA1 and BRCA2 received protection from the Supreme Court ruling. When the company builds synthetic versions of the genes that are different from how they appear in nature, then those genes are patentable. The Supreme Court opinion talks about Myriad scientists making synthetic breast-cancer genes that have everything removed except for the portions responsible for coding proteins. It wasn’t immediately clear from the opinion what Myriad plans to do with those synthetic genes.

Gene patenting is a legally contested area in a variety of genetic sciences, not just cancer genetics. Thomas concluded the court opinion with an eye for other interested parties that are watching. The Myriad Genetics ruling doesn’t apply to genes that have been altered from their natural state, he wrote. That should include many genetically engineered crops, for example.

The ruling also doesn’t preclude Myriad from patenting uses of the knowledge it gained from BRCA1 and BRCA2, Thomas wrote.