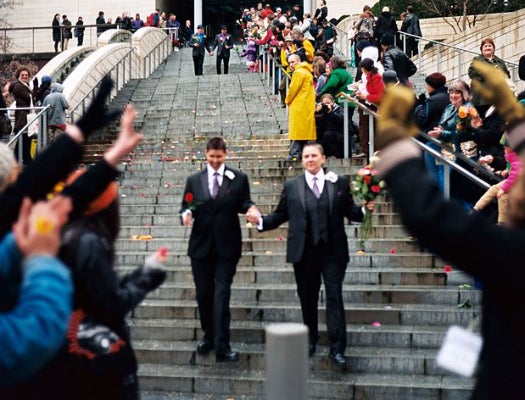 The data sets are in, and marriage equality isn’t the harbinger of death for “traditional” marriage between men and women, according to a study from the School of Community Health at Portland State University published recently in PLOS ONE.

The study took the number of opposite-sex marriages from all 50 states and the District of Columbia from 1989 to 2009, as a percentage of the adult population in each state (somewhat poetically referred to as “those ‘at risk’ of marriage“), and compared it to opposite-sex marriage rates from the 13 states (and D.C.) where either same-sex marriage or same-sex unions became legal before 2009.

The researchers found that indeed, same-sex unions aren’t bringing down the venerated institution of marriage. The rates of opposite-sex marriage did not differ in states where same-sex marriage or civil union were legalized in the time period analyzed.

“We conclude that there is no relationship between implementation of same sex marriage or strong or weak same sex union laws and rates of opposite sex marriage,” the researchers write. They had hypothesized that there could be a jump in the marriage rate with same-sex marriage laws directly after legalization, because of movements like the National Marriage Boycott where LGBT allies pledge to forgo marriage until same-sex marriage becomes legal, but the data didn’t bear that theory out.

However, the study does call for further research into how same-sex marriage prevalence, as well as the varying strengths of civil union laws, might play into opposite-sex marriage rates. They were unable to analyze the impact of divorce because of considerable missing data, and several states have enacted marriage equality laws since the end of the sample period in 2009.