NASA Will Join Japan And Italy On Mission To Mercury

A third trip so close to the sun 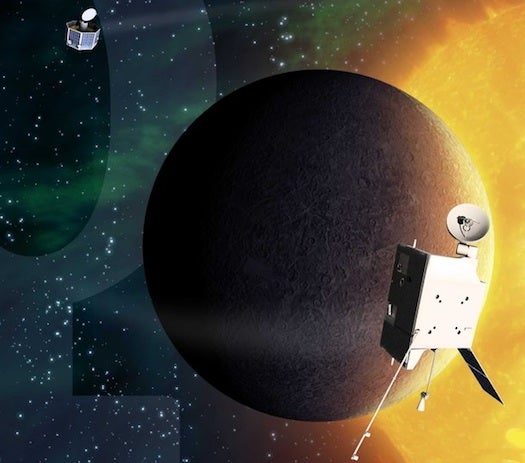 The U.S. is joining Italy and Japan on a trip to Mercury. Once there, the joint mission will determine the makeup and history of a planet that’s been difficult to study because of its proximity to the sun.

NASA Administrator Charles Bolden visited Rome last week and signed an agreement with the Italian Space Agency. The spacecraft for the mission, called BepiColombo, is being built and tested now. Estimated time of arrival: 2022.

BepiColombo aims to learn about the minerals and elements Mercury is made of, according to the European Space Agency. It will also determine whether Mercury’s core is molten and the origin of its weird magnetic field. Learning Mercury’s properties helps astronomers understand more about the early formation of the inner planets, which include Mercury, Venus, Earth and Mars. That, in turn, may help astronomers determine if planets like ours are common in the universe.

It’s difficult to examine Mercury from Earth because the sun is so bright. It’s also difficult to send spacecraft to the planet because of the sun’s enormous gravity. The European Space Agency has never sent craft so close to the sun and there have only ever been two missions to Mercury, both from NASA. The first was Mariner 10, which made flyovers in 1974 and 1975. The second was Messenger, which is still in orbit there. From those missions, NASA learned the strength and shape of Mercury’s magnetic field and that the planet has an iron-rich core and no atmosphere. Messenger found ice on Mercury’s north pole. There could be as much as 1.1 trillion tons of water in the form of ice on Mercury, astronomers estimate.