The Difference Between A Geek And A Nerd [Infographic]

They're not the same. A data-geek (or nerd?) explains. 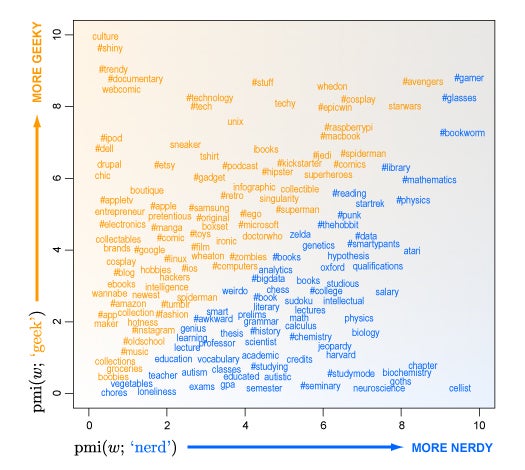 Are you a geek or a nerd? Because they’re not quite the same. (It’s okay to admit which one you are, by the way! Popular Science is a safe place.)

Burr Settles at SlackPropagation broke down the difference by using data. The methodology here is a little on the nerdy side (or is it geeky side???) but, more or less, Settles mined Twitter for the words most likely to appear near “geeky” or “nerdy.” The higher along the y axis, the geekier the words; the farther along the x axis, the nerdier.

Academic words show up frequently on the nerdy side of the graph: “Harvard,” “#studymode,” “biochemistry.” (Also, inexplicably, “goths.”) On the geeky side, it’s more about tangible objects: “iPod,” [Joss] Whedon,” #appletv.” Star Wars falls on the geeky side, but only barely, because, hey, everybody likes Star Wars.

So what did we learn? Settles writes:

In broad strokes, it seems to me that geeky words are more about stuff (e.g., “#stuff”), while nerdy words are more about ideas (e.g., “hypothesis”). Geeks are fans, and fans collect stuff; nerds are practitioners, and practitioners play with ideas. Of course, geeks can collect ideas and nerds play with stuff, too. Plus, they aren’t two distinct personalities as much as different aspects of personality. Generally, the data seem to affirm my thinking.

An awesomely nerdy project. Although “infographic” does fall onto the geeky side of the spectrum.