A Beautiful Timelapse Video Of A Rotating Thunderstorm In Texas

Slow down a supercell, add some angelic music, and it almost looks welcoming. 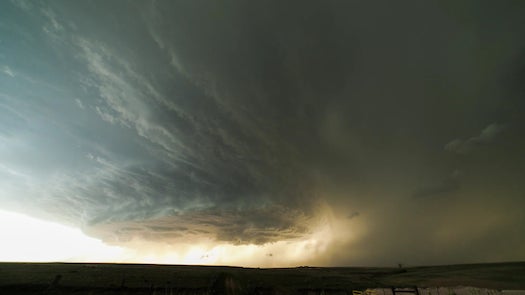 Supercells are tornado-like, rotating thunderstorms. They can be terrifying. But this timelapse, taken by photographer Mike Olbinski in north Texas, is actually lovely.

Over at his blog, Olbinski explains how he, with the help of a friend, caught the video, which is split into four parts:

The first section ends because it started pouring on us. We should have been further south when we started filming but you never know how long these things will last, so I started the timelapse as soon as I could.

One thing to note early on in the first part is the way the rain is coming down on the right and actually being sucked back into the rotation. Amazing.

A few miles south is where part two picks up. And I didn’t realize how fast it was moving south, so part three is just me panning the camera to the left. During that third part you can see dust along the cornfield being pulled into the storm as well…part of the strong inflow. The final part is when the storm had started dying out and we shot lightning as it passed over us.

Between the third and fourth portions we drove through Booker, Texas where tornado sirens were going off…it was creepy as all heck. And intense.

Intense is an understatement.