Watch The Ring Of Fire Eclipse Starting At 5:30 P.M. EST

For those outside the southern hemisphere, a livestream will show it in its fiery glory (without the risk of eye damage). 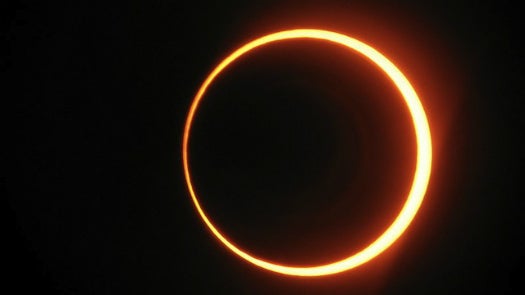 Stargazers in parts of Australia will get to witness a dramatic “ring of fire” solar eclipse later today. For anyone else who isn’t hanging out down under, SLOOH, a robotic telescope service, will have a livestream of the eclipse here.

An annular solar eclipse happens when the Moon passes in front of the sun but doesn’t cover it completely, leaving a bright solar ring around the black Moon. Hence the nickname “ring of fire.”

The solar eclipse will be visible to folks in western Australia and some southern islands in the Pacific. About 95 percent of the sun will be covered, so if you are able to see it in real life, remember that it’s probably not worth blindness–maybe don’t look it directly in the eye.

The last annular eclipse passed over the U.S. almost a year ago. The next one, a hybrid eclipse, will occur in early November.