NASA: Mars Travelers Would Get Fried By Radiation 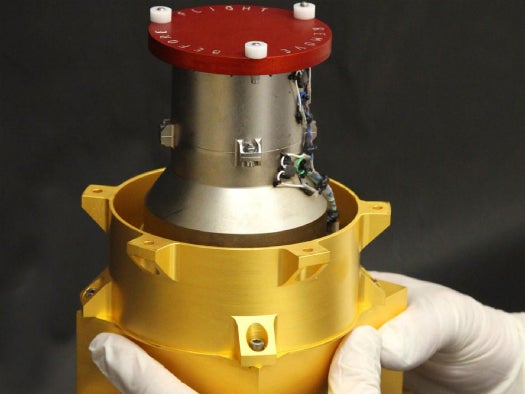 Bad news for those of you who want to go to Mars in the next few years: Without better shielding technology, you’ll probably get fried by radiation, as new data from Mars rover Curiosity shows.

Data taken by the Mars Science Laboratory’s Radiation Assessment Detector, or RAD, during Curiosity’s interplanetary journey to Mars and published in the May 31 issue of Science provides experimental confirmation for the radiation prediction models NASA already uses.

With current propulsion systems, the leisurely, 560-million-kilometer cruise to the red planet clocks in at 253 days, a length of time that based on the amount of radiation RAD registered from its shielded perch inside the spacecraft, would put astronauts above the threshold for career radiation exposure.

“In terms of accumulated dose, it’s like getting a whole-body CT scan once every five or six days,” lead author Cary Zeitlin said in a press statement. 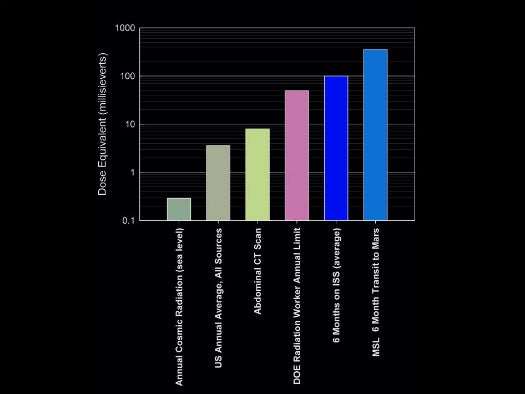 Over the course of its journey, the Curiosity rover was exposed to 1.8 milliSieverts per day of radiation from galactic cosmic rays, particles that comes from outside the solar system and provide a chronic low-dose of radiation. Astronauts making interplanetary journeys would also be exposed to short bursts of low-energy solar energetic particles from solar flares and coronal mass ejections.

“We need to get there faster to reduce the impact of the galactic cosmic rays,” Eddie Semones, a spaceflight radiation health officer with NASA, said in a press conference. Even if NASA cut the travel time to Mars down to 180 days each way, people on board would be exposed to an estimated total of 662 milliSieverts in transit, plus any radiation they might encounter on the surface.

Curiosity’s journey also occurred during a weak solar maximum, and it’s possible the solar energetic particle exposure could be greater at a different period in time, the researchers write.

RAD has continued to operate since Curiosity’s August landing, and will provide data on the radiation levels on the surface of Mars in the future. In 2015, NASA will launch a modified version of RAD to study the radiation environment in the International Space Station.