A new dinosaur found in China may be the oldest of its kind–and a crucial link between lizard-like dinosaurs and... 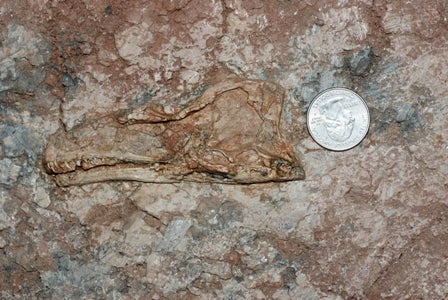 A new dinosaur found in China may be the oldest of its kind–and a crucial link between lizard-like dinosaurs and the feathered, late-period creatures that bore a closer resemblance to today’s birds.

A team of international researchers led by James Clark, from the George Washington University, found a fossilized leg bone on the side of a stream in a remote part of Xinjiang province in the far northwestern corner of China. That’s not much, but, amazingly, they found more of the small dinosaur’s body–a partial skeleton, a nearly complete skull, and a mandible. It is a new species, a basal member of the Coelurosauria family tree. Coelurosaurs are late-period dinosaurs that resembled birds as much as the typical dinosaurs we think of; it’s possible all of them were feathered.

The researchers gave the dinosaur a name: Aorun zhaoi, after the Dragon King in the Chinese epic tale Journey to the West. It is the oldest known coelurosaur–though it died a youngster.

This particular animal had many very small, sharp teeth, which are very useful clues as to what this dinosaur ate and how it behaved. The researchers suspect it preyed on lizards and primitive shrew-like mammals–though since this one is estimated to be less than a year old, we don’t really know much about how the adult of the species lived, or even how big it might have been.