Scientists Train People To Not Be Jerks

To be excellent to one another, just try out some Buddhist meditation. 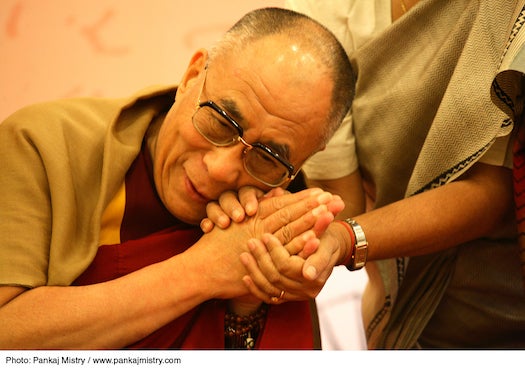 If you’re kind of a jerk, but at least concerned about your jerk-ness, take heart: researchers say they’ve shown it’s possible to increase compassion in adults.

The University of Wisconsin-Madison actually has a whole department dedicated to this kind of thing, the Center for Investigating Healthy Minds at the Waisman Center, and researchers there set up an experiment recently to see if they could get a group of people to be more excellent to each other.

First, the team had the group try the Buddhist technique of compassion meditation: thinking about a time someone was suffering, then chanting, “May you be free from suffering. May you have joy and ease.” The people focused on a loved one, like a friend or family member, then themselves, then a stranger, and finally a “difficult person” in their lives. (If only they had an estranged family member they strongly disliked; they could knock out three at a time.) A control group, meanwhile, got cognitive reappraisal training, a technique for turning negative thoughts positive. Both the groups were trained for 30 minutes a day over the internet for two weeks.

So how do you measure compassion?

The researchers here used a game. Two anonymous players–one the “Dictator” and one the “Victim”–shared a pool of $10. The dictator decided how much money the victim got. As dictators are wont to do, the victim didn’t get much: only $1 out of the $10. The person playing then had to decide how much of his or her $5 to give to the victim. The Buddhist-meditators were more likely to share more of the dough.

The researchers started the study with fMRI scans and performed them again on both groups after the training. The groups were shown images of suffering while in the machine, like a crying child or a burn victim. They found that the people with meditation training had increased activity in the inferior parietal cortex (that’s not necessarily a perfect indicator of empathy, but it suggests something’s going on, at least).

It’s not entirely clear how long this effect lasted, but it’s reassuring to think that there are ways of increasing niceness in the world. If only we could forcibly give it to the people who cut us off on our work commutes.