OpenWorm Is An Open-Source Virtual Worm, Accurate In Every Way 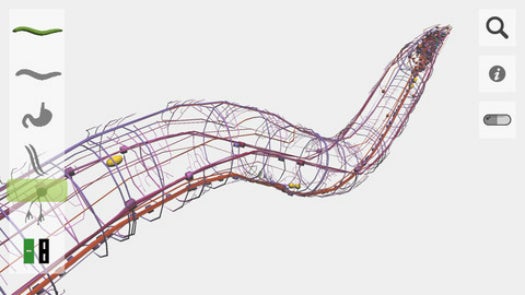 Predictive models are essential in engineering fields, but less common in biology, though accurate simulations of living organisms could help us understand disease, drug efficacy and neuroscience.

OpenWorm, a new open-source project devoted to creating a complete virtual model of a worm, aims to bring simulation into the living world by creating a digital organism–C. elegans, a nematode commonly used as a model organism in biology research.

The goal is to make a digital worm that mimics its biological counterpart in essentially every way, from the molecular level to behavioral patterns. The project’s creators explain their reasoning like this:

Because we believe brain research must accelerate, we are taking matters into our own hands. If we cannot build a computer model of a worm, the most studied organism in all of biology, we don’t stand a chance to understand something as complex as the human brain. We must crawl before we can walk!

They’re using a largely bottom-up approach, bringing together data from scientific observations of C. elegans from the past decade to simulate every aspect of the worm within a program, starting with the basics of its cell behavior. While C. elegans has been so widely studied, there’s plenty of data out there on its neurons and muscular structure–that data just needs to be integrated to create a full model.

So far, the international team has created a demo of five connected muscle segments moving together through water, and a simulation of working neurons. They’ve also released an iPhone app that allows users to explore any of the 959 individual cells within a 3-D model of C. elegans.