It's only the second torpedo of its kind ever found. 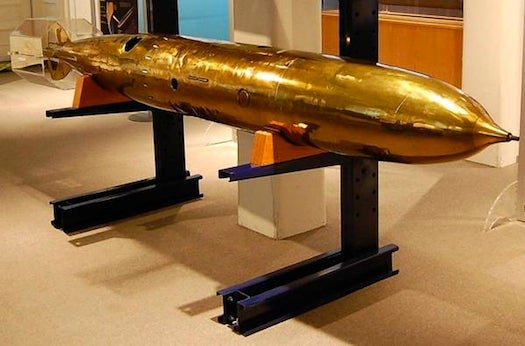 Dolphins have been used for 50 years to help the U.S. Navy echolocate mines. That project is going away in 2017 (to be replaced by robots) but in the meantime, a team of Navy dolphins have picked up something a little more vintage.

Off the coast of California, the dolphins, getting Navy training, uncovered what you see here: a Howell torpedo. From 1870 to 1889, a Rhode Island company produced a mere 50 of them, and it’s only the second that’s known to still exist (the other example is in a Keyport, Washington museum).

It might not look like much now, but back in the day, this was a top-shelf torpedo: the 11-foot, brass Howell could shoot 400 yards at 25 knots and was the first torpedo that could follow a track without leaving a wake, the Los Angeles Times reports.

Next step: get these dolphins to search for sunken pirate gold.