How It Works: The Mechanical Bomb Sniffer 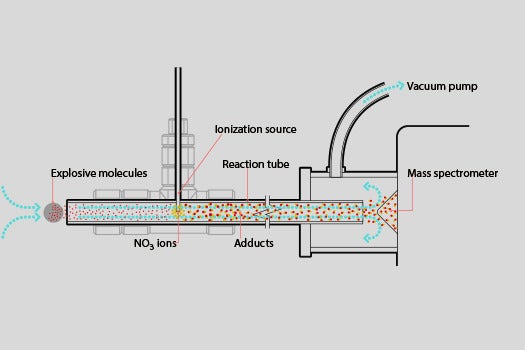 Last fall, David Atkinson and a team at the Pacific Northwest National Laboratory announced that they had “sniffed” certain explosives in ambient air for the first time. Most common explosives—RDX, PETN, blasting gels—exist in very low ambient concentrations, often in the parts-per-quadrillion range. Existing detectors are not that sensitive, meaning security forces need to test suspects directly, as in airports. A version of Atkinson’s machine could simply sniff targets, speeding the process. “It could change the way we do screening for explosive threats,” he says.

Scientists spike a glass slide with residue from a few known explosives. A vacuum pump within the detector sucks air through a one-inch wide opening at a rate of between one and five liters per minute.

The vapor passes through a copper tube toward an ionization source. Nitrate ions, which have a high charge affinity, collide with the highly polar explosive molecules, so they tend to stick together, forming an adduct—or cluster molecule.

To ensure that many of the explosive molecules in the airstream are ionized, Atkinson’s team used a long, copper reaction tube to extend the reaction period to approximately two seconds.