Atrocities often lead to unmarked graves. A team of scientists is creating better tools to help find them. 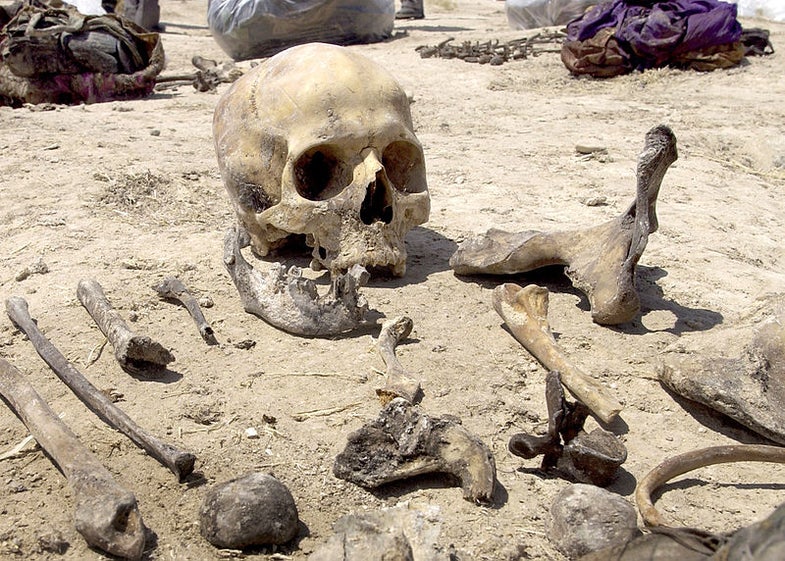 Perhaps the saddest byproduct of acts of orchestrated violence isn’t the staggeringly high body counts that can accrue, but the bodies that aren’t counted. Conflicts like the one that ripped apart the former-Yugoslav states in the 1990s and the ongoing crisis in Syria are generally marked by dually appalling statistical categories–the one counting the confirmed dead and the one tallying the missing, victims of atrocities or otherwise that are often buried without marker or record. Mexico is no stranger to such unmarked and often mass graves, a consequence of the ongoing drug-related violence there, so its perhaps an appropriate venue for researchers to launch a collaboration to develop new technological tools to help locate and exhume hidden graves.

Tomorrow in Cancun, Mexico, a small group of researchers spread out across the globe will announce at the Meeting of the Americas (it’s a scientific conference sponsored in part by the American Geophysical Union) an international collaboration that should make it more difficult for those who carry out atrocities to hide them from the world via methods so simple and crude as digging holes in the ground.

To create a more reliable toolkit for detecting clandestine graves, the collaboration is turning to the tools of the geophysicist–ground-penetrating radar, magnetometry, electrical resistivity and conductivity, etc.–to hopefully create technologies that will be far more effective at finding hidden graves. They’ll pilot to project in Colombia, where they’ll bury pig carcasses in eight different simulated grave sites in varying climates and soil types, using different technologies at different intervals to collect data on the states of decay and generally create a picture of what buried bodies look like in various kinds of forensic and geophysical data to aid in the search for hidden human graves.

The hope is that enhancing the tools for such grave spotting will help international authorities locate hidden bodies, inform loved ones of their fates, and designate blame in the international (and legal, where applicable) arena. More importantly, by making graves–particularly mass graves–easier to locate it is hoped that technology might actually create a deterrent for the kinds of atrocities that tend to lead to bodies hidden in the ground.