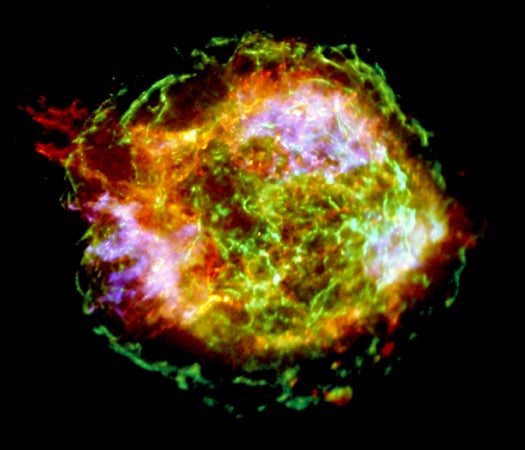 The late Carl Sagan said it best on his TV show Cosmos: “We’re made of star-stuff.” He meant that atoms which make up our bodies—and everything around us—formed when giant stars blew up billions of years ago. That material shot across space, clumped into the solar system, and led to life on Earth.

Now a group of German scientists have gone meta on Sagan. In cores of sediment drilled from the Pacific Ocean bottom, the researchers found traces of iron-60. It’s a heavier isotope of iron forged only by supernovas and mostly vanishes in a couple dozen million years. What’s more, they found the iron-60 inside 2.2-million-year-old bacteria organs called magnetosomes, which the microbes use to sense the Earth’s magnetic field.

The half-life of iron-60 is 2.62 million years. Iron-54, by contrast, is the most abundant form of iron on Earth and hardly decays at all. (Which is why it still exists today.)

The magnetosomes with iron-60 came from a 2.2-million-year-old layer of sediment. The only reasonable explanation, which Technische Universität München announced in a press release today, is that a nearby supernova splattered Earth with its iron-rich dust, the material sank to the ocean bottom, and bacteria ate it.

The Fe-60 wasn’t easy to find. Less than one quadrillionth (0.0000000000001 percent) of the iron in the bacteria organs was made up of the supernova dust. To detect it, the German scientists had to use an accelerator mass spectrometer.

Now that they’ve proven the method, the researchers plan to look in other sediment cores for life-based traces of nearby supernova explosions across time.

[Via Technische Universität München and APS.org]