The Energy Fix: When Will The U.S. Reach Energy Independence? [Infographic] 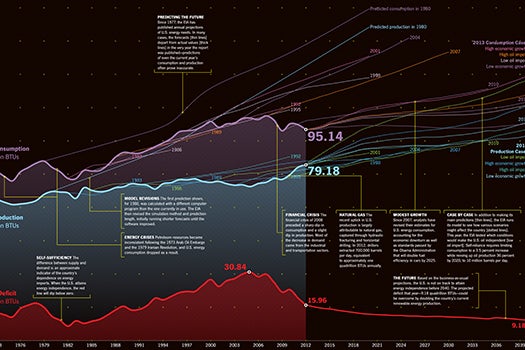 Since long before the rise in big data, the U.S. Energy Information Administration has tracked the country’s energy consumption and production [thick lines]. The size of the gap between the two reflects how close the country is to energy independence. The EIA also projects energy production and usage into the future to help guide industry regulations and policy decisions. A computer program—which took the EIA nearly two decades to build and requires 35 analysts to run—generates its predictions [thin lines] based on current energy laws and regulations. While it’s impossible to predict influential events such as wars and recessions, the general trend suggests that since 2005—when the energy deficit [red] peaked—the U.S. is making more of its own energy and using less overall. “We as a society are valuing energy independence more,” said Steven Wade, an economist for the EIA.