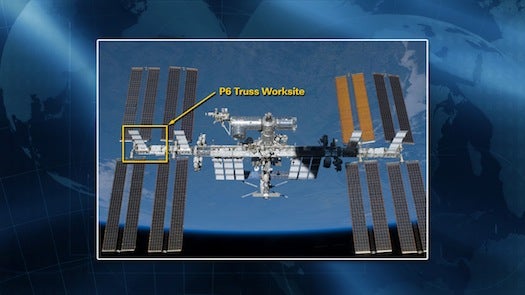 Astronauts on the International Space Station are preparing for a potential emergency spacewalk to fix an ammonia coolant leak outside the station. On Thursday, the ISS crew spotted small white flakes floating away from an area of the Station’s P6 truss structure, and noticed pressure drops in the control panel of the pump and flow control system for the power-supplying solar arrays.

“Suddenly very busy!” tweeted astronaut Tom Marshburn, who along with Chris Cassidy is preparing for the contingency EVA. “Ammonia leak on the outside of station means that Cassidy and I will be doing a spacewalk tomorrow to try and repair it.”

Mission Control teams worked overnight to understand and sort through the problem and find potential fixes or work-arounds for the electricity systems. The Mission Management team met this morning to identify any issues or latent hazards of the spacewalk, and they are seeking input from all the international partners. The crew is expecting a final go or no go by later today on whether the spacewalk will take place. There will be an update on NASA TV at 20:00 UTC, 4 pm EDT.

“The whole team is ticking like clockwork, readying for tomorrow. I am so proud to be Commander of this crew. Such great, capable, fun people,” said ISS Commander Chris Hadfield via Twitter. Yesterday, he called the leak “serious” but that the situation was stable.

NASA has said that while the coolant is vital to the operation of the ISS for the electricity-supplying systems, the crew is not in any danger. The ammonia cools the 2B power channel, one of eight power channels that control the all the various power-using systems at the ISS. All the systems that use power from the 2B channel, the problem area, are being transferred throughout the day to another channel. The 2B channel will eventually shut down when the coolant is depleted, and the power is being diverted in order to keep everything up and running on the station.

Cassidy and Marshburn are now preparing for the spacewalk in the Quest airlock, arranging their spacesuits and gathering the specialized tools they will need to do the work outside the station. These two are the perfect people to conduct this spacewalk, as both are veterans of three spacewalks, two of which they performed together on the STS-127 space shuttle mission to the ISS, and they went to this exact same area on the P6 truss to replace batteries. They have also trained for this particular spacewalk already, as this spacewalk task does fall under the “Big 12” of contingency spacewalks of possible serious issues that may occur. All astronauts train for these in case an unexpected event requires a quick response.

While Cassidy and Marshburn prepare in space, Astronauts at NASA’s Johnson Space Center are using the Neutral Buoyancy lab – a 12- meter (40 ft.) deep swimming pool with mockups of the space station that simulates the zero-gravity conditions in space – going through the entire expected EVA. ESA astronaut Samantha Cristoferretti and NASA’s Terry Virts are walking through and choreographing the procedures to make sure the tasks could be done in a reasonable time as well as looking for potential hazards. They will confer with the ISS astronauts to share their experiences.

This video shows information about the potential spacewalk, as well as footage of the ammonia leak captured by the crew.

While NASA does not know for certain the exact location of the leak, they are focusing on the pump and flow control system, the suspected source. That exact same area and system was the location of a minor leak, first identified in 2007 – thought to have been caused perhaps by a micrometeorite impact — and in November 2012 two astronauts went on a spacewalk to fix the problem. They rewired some coolant lines and installed a spare radiator, and it appeared the problem had been fixed.

That first leak was not visible during the EVA, but this new leak is quite noticeable, as the crew wwas able to see the leak from inside the station.

One of the driving factors for getting the spacewalk underway as quickly as possible is that the location of the leak and the potential fix are not exactly known. The hope is that it is still leaking by the time they get out there on Saturday morning, so that they can easily identify the source of the leak. The first task will be identifying the source, then possibly replacing the current pump and flow control system with one of the spares, located handily out at the P6 truss. If that is not the source of the leak, they will look through the area to try and identify the source. NASA said the leak could potentially be located in the internal plumbing of the system, which would be harder to see immediately.

We’ll keep you updated on the situation.