A ‘Pumpkin’ Pod For Flying To The Moon Like A Princess

Northrop Grumman performed a viability study on plans from a private startup that wants to send people to the moon for a cool $750 million. 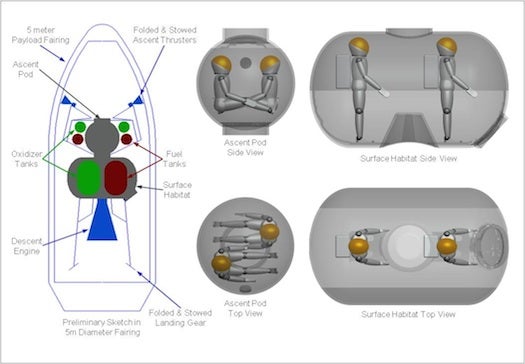 Ready to land on the moon like a princess? Private spaceflight startup the Golden Spike Company has released plans for a lunar lander with a round pod, nicknamed “Pumpkin,” for crew members. Plus there’s a larger oval habitat for people to use once they’re on the moon.

The plans, as well as the Golden Spike’s other technologies for bringing humans back to the moon, are still a long way from reality. The startup has just had aerospace company Northrop Grumman evaluate Pumpkin’s blueprints, plus other aspects of its business plan.

Northrop Grumman found the Pumpkin viable. It also found that the lander should probably use non-cryogenic propellants, which means no liquid hydrogen or other fuels that need to be kept cool.

The Golden Spike, whose founders and advisors include former NASA officials, wants to offer commercial moon flights, most likely to governments, who would be better able to afford the $750 million ticket price.