Summer in the city could get a whole lot more miserable in the coming decades, according to a new report. Warming weather could make summer in the city deadly in the next few decades, according to a study published this week in Nature Climate Change. By the 2020s, New York City will see 22 percent more heat-related deaths per year compared with 1980s, the researchers predicted.

Urban centers like New York City are especially sensitive to extreme temperatures because of the heat island effect. The Environmental Protection Agency estimates that the annual mean temperature of a city with a million or more people can be up to 5.4 degrees Fahrenheit warmer than its more rural surroundings. (NYC currently clocks in with more than 8 million.)

Using 16 computer models of present and future climate change, scientists at Columbia University and the Chinese Center for Disease Control and Prevention found that while warmer temperatures would reduce the number of deaths due to cold in the winter, the increase in heat-related deaths in summer months would cause a net 6.2 percent spike in weather-related mortality per year in the city by the 2020s. 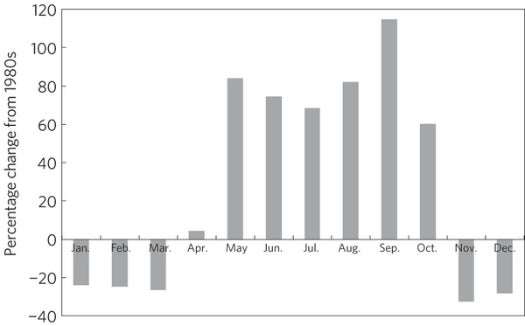 The average percentage change in temperature-related deaths in the 2080s versus the 1980s.

“What our study suggests is that the heat effects of climate change dominate the winter warming benefits that might also come: climate change will cause more deaths through heat than it will prevent during winter,” lead author Patrick Kinney, a professor of environmental health sciences at Columbia University, told The Guardian.

The study did not take into account potential changes in the use of air conditioning, heat alerts or cooling shelters in the future. Those factors can help mitigate the risk of extreme heat for vulnerable populations like the elderly.