First American Mission To Sample An Asteroid Gets Green Light

OSIRIS-REx will scoop up a couple of ounces of dirt from the asteroid Bennu and bring it back to Earth.

Earth-bound scientists are on track to get their hands on asteroid soil, straight from the source, in 2023. An asteroid-sampling mission, planned for launch in 2016, is moving into development, NASA and the University of Arizona announced yesterday.

The mission, called the Origins-Spectral Interpretation Resource Identification Security Regolith Explorer or OSIRIS-REx, will land a spacecraft on the asteroid Bennu, scoop up at least two ounces of its dirt, and bring the sample back to Earth for testing. OSIRIS-REx’s planners hope Bennu’s soil will contain molecules dating from the origin of the solar system. Bennu may contain water and amino acids, which would offer clues to the birth of the solar system and of life on Earth.

OSIRIS-REx will also map Bennu’s other properties, such as non-gravitational forces on the asteroid, while it spends more than a year hovering near the asteroid’s surface. Ultimately, OSIRIS-REx’s findings will help NASA in its plans to rope an asteroid into the moon’s orbit for human visits, the agency said in a statement. 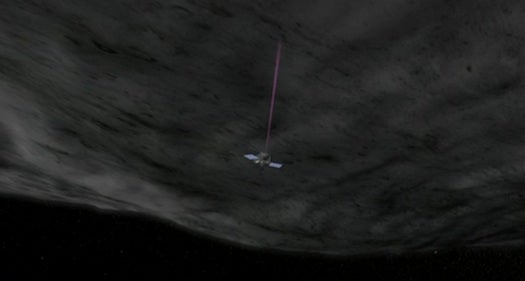 Bennu is more than 1,600 feet in diameter and contains carbon. It swings relatively close to Earth in its orbit, and has a 1-in-2,000 chance of a collision in the 22nd century, according to the University of Arizona, which is leading the mission. Scientists chose Bennu for a sampling mission because of its accessible orbit, carbon makeup and large size, the Los Angeles Times reported.

NASA first announced plans to visit Bennu in 2011. The mission will cost $1 billion, according to the University of Arizona.