Happening Now: An Asteroid And Its Moon Sail Past Earth

The pair will come their closest at 4:59 pm ET today. 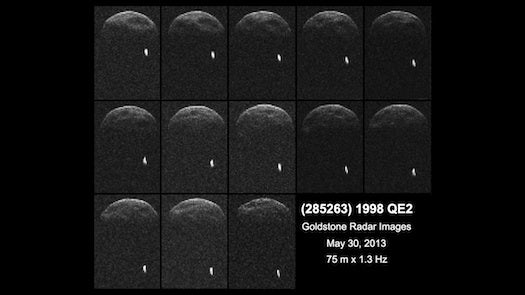 An asteroid is sailing past Earth today, and it’s bringing along some luggage.

At 4:59 pm ET, asteroid 1998 QE2 will be a mere 3.6 million miles away from our home planet. And it’s not alone. It is bringing with it a moon that orbits it as it flies along its own path.

Okay, “mere” is an exaggeration. It will come to about a distance that’s 15 times the distance between the Earth and the moon. The asteroid is not a threat to Earth, NASA says.

Astronomers first discovered 1998 QE2 in 1998, hence its name. They only discovered that it had an orbiting moon on May 29, however, when radar images showed the moon as a smudge by its side. Among asteroids near Earth, only 16 percent that are 200 meters (655 feet) in diameter or larger are made up of two or three pieces that travel in tandem, called binary or triple asteroids. The new radar images suggest 1998 QE2 is 1.7 miles in diameter. Its moon is 2,000 feet wide.

The pair will not get this close to Earth again for another 200 years.

Over the next week, astronomers using the Deep Space Network antenna in Goldstone, California, and the Arecibo Observatory in Puerto Rico will observe 1998 QE2 as it comes by. Radar helps astronomers discern asteroids’ shapes, rotation, surface features and orbits. Such observations are a part of NASA’s larger effort to learn about asteroids so it can predict when any do threaten Earth–although, of course, we’re not always the greatest at that quite yet.