A look at possible propulsion for NASA's plan to bring an asteroid home for study. 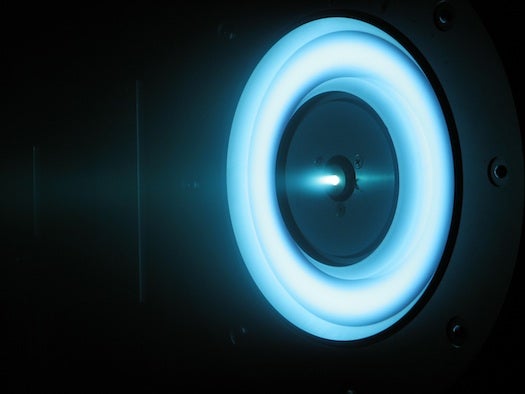 When NASA sends a rocket out to tow an asteroid into Earth orbit, it’ll be ion propelled.

Ion propulsion engines harness magnetic fields to create thrust, instead of depending on chemical explosions the way chemically fueled engines do. NASA engineers are developing such an engine for the agency’s plans to bring an asteroid into Earth’s orbit and then send astronauts there to study it. NASA Administrator Charles Bolden went to see a prototype engine yesterday at the Jet Propulsion Laboratory in Southern California, the Associated Press reported.

Bolden also praised the bring-it-to-us asteroid study plan. Originally, the Obama Administration wanted to send people to the asteroid belt, but bringing an asteroid here instead will be cheaper. The technologies the Asteroid Retrieval Initiative develops will help NASA shuttle people to Mars in the future, Bolden told the Pasadena Sun.

Ion thrusters are more fuel efficient and last longer than chemical engines, characteristics the U.S.’ asteroid-hauling rocket will need, John Brophy, an electric propulsion engineer at the Jet Propulsion Laboratory, told the Pasadena Sun. NASA began researching the technology in the 1950s and first used it in a spacecraft in 2001.

The Asteroid Retrieval Initiative will cost an estimated $2.6 billion. It should have people on an asteroid in six to 10 years. The project’s leaders are looking to bring in an asteroid that’s 20 to 25 feet in diameter—something that would burn up in the Earth’s atmosphere in the event that it strays too close to home.