Are These Fragments From The Mysterious Forest-Flattening 1908 Tunguska Explosion?

During breakfast on June 30, 1908, a man named S.B. Semenov was sitting on a porch at a northern Russian... 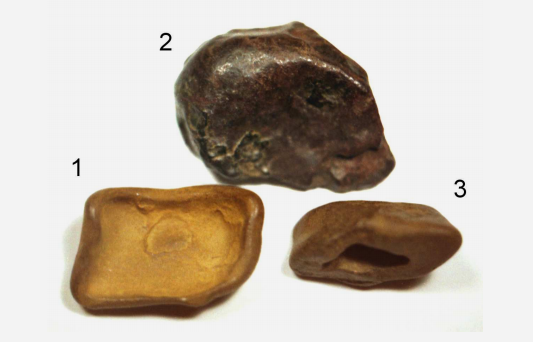 Zlobin claims these three stones, which he collected during an expedition to the Tunguska impact zone 25 years ago, are remnants of whatever object exploded in Earth's atmosphere above Russia June 30, 1908. No. 1 is nicknamed "dental crown", No. 2 is called "whale" and No. 3 is "boat," for the purposes of easy identification. Andrei Zlobin/Russian Academy of Sciences
SHARE

During breakfast on June 30, 1908, a man named S.B. Semenov was sitting on a porch at a northern Russian trading post when the sky burst into flames. He looked up and saw the heavens appear to split apart, and he felt as though his shirt was on fire; after a moment, a heavy blow knocked him off his feet and he passed out. The inferno, afterward known as the Tunguska Event, was a high-altitude explosion of a meteor or a comet–but nobody ever found the remains.

Whatever it was, it flattened more than 80 million trees across more than 800 square miles. Semenov lived to tell about it, later sharing his tale with the Russian explorer Leonid Kulik.

Now a Russian scientist claims he’s found evidence of the impactor. Andrei E. Zlobin, a geologist with the Russian Academy of Sciences, posted a description of his “probable Tunguska meteorites” to the arXiv preprint server last week.

Zlobin traveled to the Khushmo River, nearby the Tunguska region, and collected about 100 interesting-looking rocks. What’s weird is that Zlobin found these rocks during an expedition in 1988. What convinced him to look at them again 20 years later isn’t clear, but in 2008, he took them out and examined them in greater detail. He picked out three stones that he says have clear evidence of melting. Here’s why that’s interesting: Tree ring evidence suggests rocks on the ground would not have melted during this event, but the fireball in Earth’s atmosphere would have been hot enough to melt them. So any melty rocks would seem likely to be remnants of the actual impactor.

It’s still not clear whether the object had cometary or asteroid origins, and these rocks won’t settle the question. And there are still many open questions: Why did he wait so long? What are these rocks made of? What’s their chemical composition?

The paper is written in kind of halting English (“was not able to make melting of stones” and so on), but that doesn’t diminish its potential impact. Other scientists will no doubt review his findings, and it could be some time before any debates are settled. But Zlobin’s tale is certainly intriguing.