Somebody Just Shelled Out $5.3 Million For A Francis Crick Letter Describing DNA

Which makes it the most expensive letter ever sold at auction 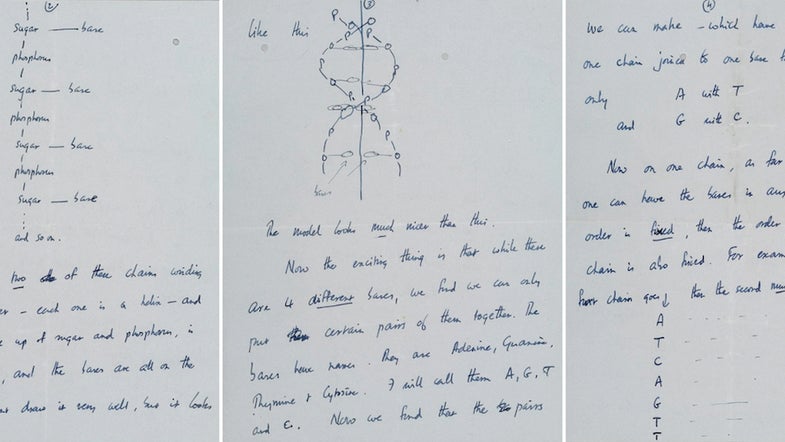 Describing the double-helix structure of DNA was arguably the most important scientific discovery of the 20th century. So it was a big deal when this letter, penned by one half of the duo who discovered the structure, went on sale at a New York auction. Now the letter has been sold–for $5.3 million.

Francis Crick wrote the letter to his 12-year-old son in 1953. The full transcript is here, which is worth reading just for the wonderfully understated beginning:

Jim Watson and I have probably made a most important discovery.

Watson and Crick, along with Maurice Wilkins, were later awarded the Nobel Prize for that “probably… most important discovery.”

The $5.3 million bid makes this the most expensive letter ever sold at auction (previous king: an Abraham Lincoln letter sold in 2008 for $3.4 million). The buyer was anonymous, but we’re assuming he or she really wanted this little piece of history. If you’re looking for something cheaper, the auction house, Christie’s, is also selling a series of Crick’s other mementos. Bidding starts at $250,000 for Crick’s Nobel medal.