New walls in the Rockaways will protect a vulnerable stretch of the A train tracks. 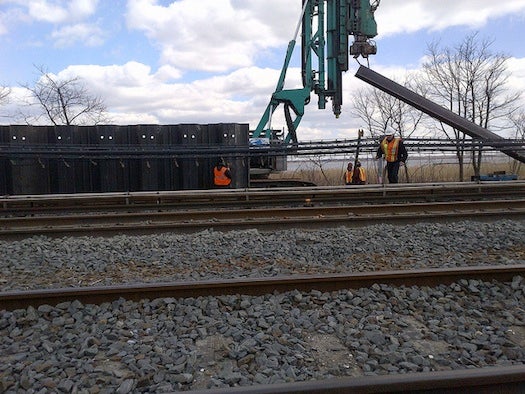 After Hurricane Sandy, there was a lot of talk about sea walls for New York City. Now a few walls really are going up—out in the Rockaways, Queens, a neighborhood that’s still feeling the effects of the storm, WNYC reports.

Two miles of steel walls will protect a part of the A-line train that’s still out of service from Sandy. (Rockaways residents who commute to Manhattan now use Metropolitan Transportation Authority-provided buses that WNYC previously reported sometimes takes all night to get people home.) The new walls are made of “marine steel” designed to resist saltwater corrosion, contractor Mitch Levine told WNYC. They will be seven feet tall, two feet taller than Sandy’s surges. The walls are set to go up by May 1.

Meanwhile, WNYC reported that the ruined circa-1950s subway electronics in the Rockaways aren’t getting the same forward-looking makeover. Instead, the Metropolitan Transportation Authority will be getting those copper wires back online in any way it can to meet its goal of returning Rockaways A train service by this summer. Measures to prevent the next flooding disaster, such as elevating the control house or computerizing the electronics system, will have to wait.