Outcome: your Chex Mix will be better dispersed on Mars. 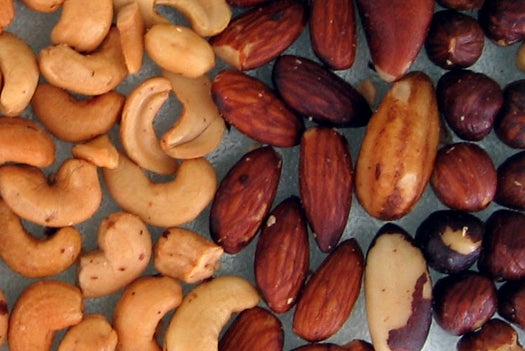 You may or may not have heard of the Brazil nut effect, but you’ve probably experienced it: open up a can of mixed nuts (or box of muesli, or any other heterogenous mixture of differently sized foodstuffs) and discover that the biggest items (e.g. Brazil nuts) have all migrated to the top. More scientifically, that process is called granular convection, and understanding it has applications far beyond the snack food industry, including developing avalanche safety systems (so you can ride out that avalanche in the top layers of snow) or in geology.

Physicists have a pretty good idea how the Brazil nut effect works, and manufacturers choose shapes of equipment and packaging to limit its impact on food production. But woe betide the space tourist who wishes to eat a homogeneously distributed packet of nuts while in transit to the Moon or Mars. Nobody had attempted to study the Brazil nut effect in reduced gravity–until now. Researchers at Kobe University in Japan and Technical University of Braunschweig in Germany have risked life, limb and lunch aboard an ESA-managed Vomit Comet to determine if reduced gravity conditions will affect granular convection.

The researchers found that dark green 8mm glass beads (ersatz brazil nuts) traveled upward through a matrix of clear 1mm glass beads much more slowly under low-gravity conditions. That is, the Brazil nut effect would be weaker on Mars or the Moon than it is on Earth. This kind of research is of little use to us Earth-bound fools today, but the data could be important for a future attempt to build structures, manufacture goods, or mine ores on other planets. Or, you know, it can help keep the interplanetary Chex mix from getting too lopsided in transit.