The gases help confirm it really was a nuclear test. 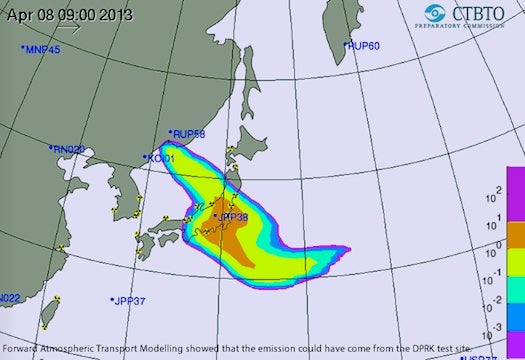 When North Korea detonated a nuclear bomb underground in February, seismic researchers knew right away. The nuclear test shook the ground like a 5.1 magnitude earthquake, and in an area not known for natural quakes.

Now, the results are coming in from further tests that seek to learn more about North Korea’s nuclear capabilities.

The Preparatory Commission for the Comprehensive Nuclear-Test-Ban Treaty Organization has picked up radioactive gases at monitoring stations hundreds of miles away from North Korea, the commission announced today. The commission found two radioactive isotopes of xenon, xenon-131m and xenon-133. The gases appeared at a station in Takasaki, Japan, in a ratio that’s consistent with their coming from a nuclear fission reaction in North Korea 50 days ago, the commission said. The North Korea nuclear test occurred 55 days before the gases showed up in Takasaki on April 9.

The CTBTO first said it had found xenon isotopes in the air in February, but then retracted the finding because there wasn’t enough evidence linking those isotopes to North Korea. The commission seems more sure now, although commission scientists are still working to eliminate alternate explanations for the xenon measurements, such as releases from nuclear power plants. So far, they haven’t found any evidence of other possible xenon sources, CTBTO researcher Mika Nikkinen said in a statement.

The seismic measurements that the CTBTO, the U.S. Geological Survey and other agencies made right after the North Korean test gave them a rough estimate of the power of the bomb. (It could have been anywhere from 4.6 kilotons to 11.7 kilotons, Columbia University seismologists reported. The Hiroshima and Nagasaki bombs ranged between 15 and 20 kilotons.)

Radionuclide measurements like these can tell researchers much more. Ratios of xenon isotopes can sometimes indicate whether the source was a uranium or plutonium driven reaction, Nature News reported February 12, but the CTBTO hasn’t been able to determine this from the Takasaki measurements, Nikkinen said in a YouTube video from the CTBTO.