For when touchscreens will be *so 2010s* 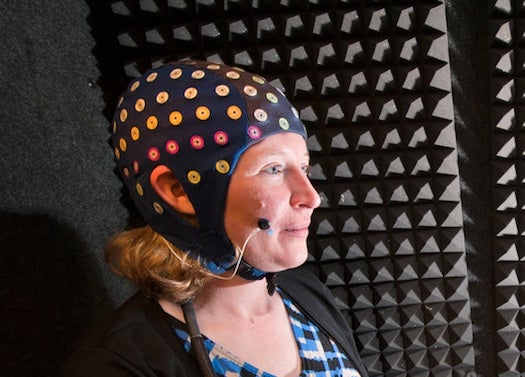 One of my friends already thinks that people look silly holding up tablets to take photos, so I’m not sure what he’d think of using a tablet with a wire-covered EEG cap on. The experience might be worth the side-eyes, though: Samsung is researching a system that lets people control a Galaxy Note 10.1 with their thoughts, MIT Technology Review reported.

This is definitely something for the future. Samsung has no plans yet to sell what they’re researching, and it works pretty slowly, allowing just one selection every five seconds. Once it is ready for sale, though, it could be especially helpful for those who have trouble with fine motor control (people with cerebral palsy, for instance). Of course, it could also just be cool for anybody.

Researchers still need to work on improving their detection of genuine, directed brainwaves versus noisy artifacts. They also need to make a brainwave-detecting cap people will actually want to wear. Roozbeh Jafar, an electrical engineer at the University of Texas, Dallas, has developed an EEG cap that works without the scalp gel many such caps require, but it’s still large and unwieldy.

Be sure to check out Technology Review for a video of someone using a prototype system to pick an app, pick a song to play, start and stop a song, and choose some pre-recorded phrases from a list. That last feature suggests people who can’t speak could use this to express their wishes.