We're living in the age of the completely documented existence. 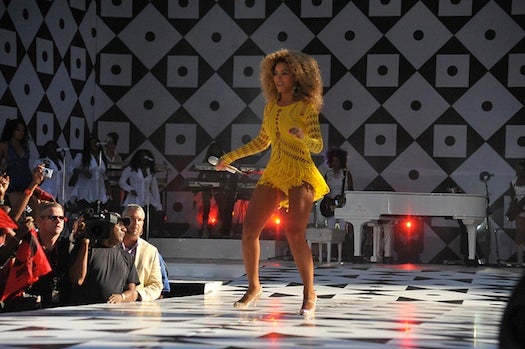 Beyoncé owns all likenesses of herself, and there are probably way more of those than you realize—because since 2005, she’s had a “visual director” shoot her waking life for up to 16 hours a day, GQ reported.

That footage, along with digital files of interviews she’s given, videos of her shows, a video diary she’s kept and nearly every photo of her, all live in a long, narrow temperature-controlled room in her office suite in mid-town New York. A U.S. Library of Congress blogger called out GQ for not naming the digital archivist who must keep all of those things in order. It will take several months just to label, date and cross-reference Beyoncé’s digital library of herself, GQ reported.

Curious about what it takes to be this unnamed archivist? The Library Journal found the original job posting for the position in January, soon after the GQ profile came out.

Beyoncé isn’t the only famous person to have a digital archive. In 2010, author Salman Rushdie bequeathed his old computers to Emory University in an update to the old practice of giving authors’ paper drafts and letters to archives. Visitors to the Rushdie archive can see his emails, web search histories and, of course, .doc drafts of his novels.

At the time, the storage of digital files from laptops, CDs and floppy disks (John Updike’s, at Harvard University) required charting new ground in archiving. Now the field is spreading, evidently even to pop celebrities.

[GQ via the Library of Congress]