Astronomers discover rainwater falling all over the planet! 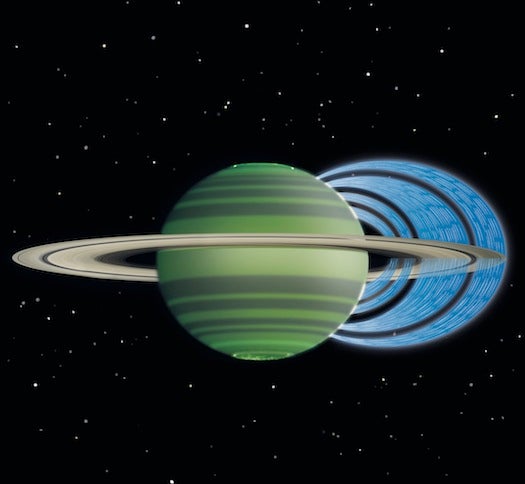 This artist’s concept illustrates how charged water particles flow into the Saturnian atmosphere from the planet’s rings, causing a reduction in atmospheric brightness. Wow!

Exciting news from space: Astronomers have discovered that charged water particles fall from Saturn’s rings over large areas of the planet, and the rainwater has a major impact on Saturn’s atmosphere.

Previously, scientists thought water particles only fell to the planet in two or three narrow bands. But after analyzing data from the Keck Observatory in Hawaii, astronomers at the University of Leicester found that the ring-rain is actually widespread and influences the composition and temperature of large parts of Saturn’s upper atmosphere.

“Saturn is the first planet to show significant interaction between its atmosphere and ring system,” James O’Donoghue, the paper’s lead author, says. “The main effect of ring-rain is that it acts to ‘quench’ the ionosphere of Saturn, severely reducing the electron densities in regions in which it falls.”

According to the researchers, Saturn’s magnetic field draws charged water particles in the rings toward the planet, causing the rain effect. This isn’t the first time astronomers have detected odd weather activity on our solar system’s second largest planet. In 2011, scientists observed that Saturn’s moon Enceladus was spewing huge jets of water onto its host planet.

The study appears in this week’s issue of Nature.