This Is The First Bear To Get Brain Surgery

Champa, a 3-year-old Asiatic black bear, was operated on to cure hydrocephalus. 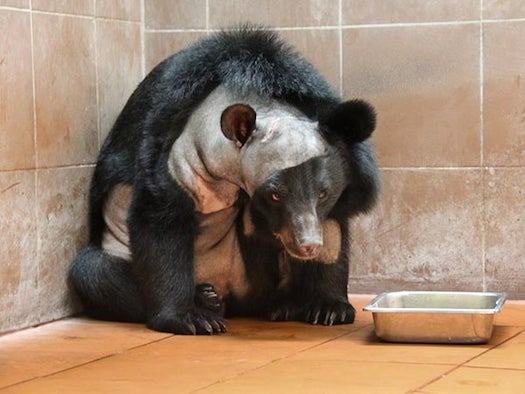 Meet Champa, the first bear to have brain surgery.

Rescued Laotian bears are often brought to a sanctuary in northern Laos that’s run by the Australian nonprofit Free the Bears. Despite being on an endangered species list, the Asiatic black bear’s bile is still harvested as an ingredient in traditional medicine, and it’s regularly threatened by traffickers, National Geographic explains.

Champa, a 3-year-old Asiatic black bear, has spent most of her life at the sanctuary. She always had a malformed head and interacted oddly with the other bears. Eventually veterinarians diagnosed her with hydrocephalus. That would mean euthanasia in most cases, but because of Buddhist practices and wildlife protection laws, that wasn’t an option. So a South African veterinary surgeon stepped up to perform laparoscopic surgery.

You can guess from the photo that this has a happy ending, but do check out the National Geographic article for the details. The story of the surgery is fascinating.