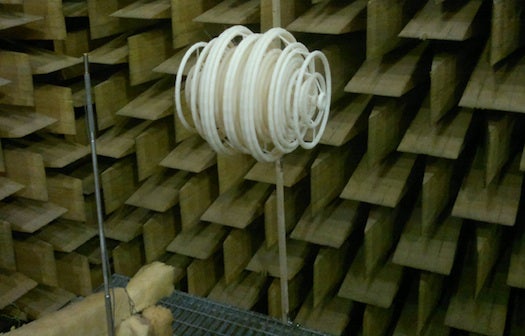 This plastic ring system doesn’t exactly make the eight-centimeter ball inside less noticeable to the eye—but it does make the ball undetectable to sonar at a specific pitch. Spanish scientists have created the first cloaking device to completely shield a 3-D object from sonar, Science News reported.

Another cool thing about the device: It’s one of the simplest invisibility cloaks ever made. Most cloaking devices are made of sophisticated lab-made stuff called metamaterials, which are engineered to have properties that don’t appear in nature… you know, like scattering light waves, microwaves or sound waves in such a way that they’re invisible to devices that detect those waves. This device, on the other hand, is made of 3-D printed plastic.

The shape of the plastic rings is the secret to its sonar invisibility. Its creators, a team of physicists from Spain, ran computer simulations to find a shape that would scatter sound waves in such a way that they cancel out the scattering by the ball tucked inside. When tested in lab, the rings worked for sound waves of 8.55 kilohertz—”an audible high pitch,” Science News reported—aimed at the device from one specific direction.

The device’s limitations mean it’s a long way from hiding full-sized ships or submarines from sonar. The U.S. Office of Naval Research is studying the possibility of sonar invisibility, however, and partially funded this research.

The Spanish team plans to try to make devices that shield objects from sonar coming from several directions and from a larger range of sound wave frequencies. The team’s current plastic cloak appeared in the March 22 issue of Physical Review Letters.